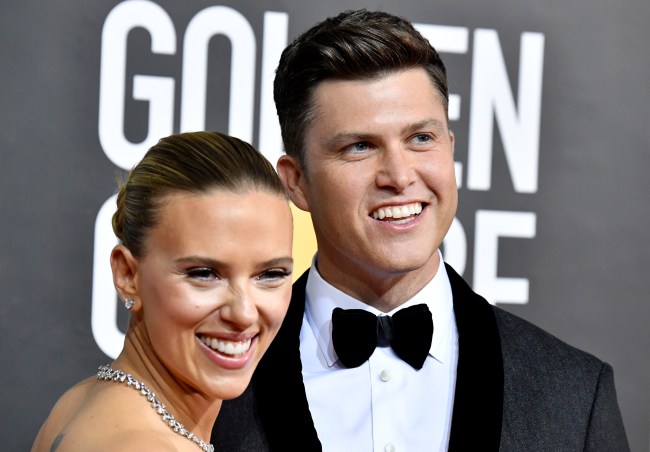 Scarlett Johansson, the World's Highest Paid Actress, starred in the biggest movie of ALL TIME and two other movies with Best Picture Oscar Nominations and she also got Double Oscar Acting Nominations.

Scarlett Johansson was nominated for two acting Oscars today: one for lead actress and one for supporting actress. I haven’t seen either of the movies, but I love ScarJo. Not too much, the right amount. I saw her on Broadway in Tennessee Williams’ Cat on a Hot Tin Roof. Our seats were close enough that I could actually see her tears splashing to the stage floor. I’m talking big drops, rolling off her cheeks, practically making noise as they plunked down. I can’t imagine possessing that level of acting ability. It’s one thing to make your eyes moist, blink a bunch, maybe have a tear run down your face. But to summon a damn eyeball geyser, every night for a 15-week engagement, is incredible.

But this isn’t about Scarlett Johansson. She’s sitting on TWO Oscar noms and more money than Oprah thanks to her Black Widow earnings. Lord knows she’s probably received enough praise for this lifetime. Instead, let’s shift focus and appreciate that behind every great woman is a great man. And that couldn’t be more true of the incredible, dignified, unselfish Colin Jost.

This guy was cut from the finest cloth available to Staten Island. He majored in Hist & Lit at Harvard, where he was dormmates with Pete Buttigieg (whom he now plays, occasionally, on SNL). More importantly, Colin Jost is a great dude. One of the nicest people alive. I hosted for him once at Caroline’s, and it was a night I remember for Colin’s kindness.

Many of his SNL friends and castmates showed up to support. I recall at least five people featuring for him, because he’s too nice to refuse anyone stage time. That’s unheard of for a headlining weekend show. He sold out the entire weekend and then let a bunch of friends take the stage before him. Imagine cooking yourself a delicious, perfect meal only to have five of your coworkers ring your doorbell in succession. You make a plate for each of them and by the time you serve yourself, you’re left with a much smaller portion than you’d hoped for, and no leftovers to carry you through the week. Not me, not on my watch. Host > Feature > Headliner. Keep it simple. But you know what? Maybe Colin’s generosity of spirit is one of the many qualities that charmed Scarlett’s heart. Maybe that’s why he’s marrying her while I’m whacking it to salacious DMs from women in the auto industry. (Not that there’s anything wrong with that. Keep truckin’, you naughty little Rosie the Riveter!)

I don’t want to take anything away from Scarlett. But here’s the thing: if you compare a rough timeline of their relationship with ScarJo’s IMDB page, you notice that her work post-Jost kickoff is undeniably superior to her work prior. Sources say they went on their first date in the spring of 2017. That’s right around the time that her film Rough Night came out, which scored 44% and 29% on Rotten Tomatoes. Not great, but we’d have to assume she took that role and shot that movie before Colin came into her life.

But THEN, as their relationship BLOSSOMED, Scarlett voiced a role in Wes Anderson’s Isle of Dogs (90% and 87% on RT), starred in Avengers: Infinity War (85% and 91% and the fifth-highest grossing film of all time), starred in Avengers: Endgame (94% and 90%, and, uh, the highest grossing film ever), Marriage Story (Oscar nomination for best actress), Jojo Rabbit (Oscar nomination for best supporting actress), and is currently in production on her OWN Black Widow movie.

Obviously we can’t attribute Scarlett’s incredible run of form solely to her union with Jost. Maybe her old boyfriends/husbands were just horrific, uninspiring people (sorry Ryan Reynolds). Even so, I like to think that Colin Jost is the muse that Scarlett needed to really explode to her highest potential.

In closing, let’s make sure to appreciate all the incredible men behind the many female nominees at this year’s Oscars.

PS- this entire blog is a fucking joke in response to the lack of female representation in many categories at this year’s Oscars. Obviously. Wish I didn’t have to write that but the internet tends to struggle with these things.