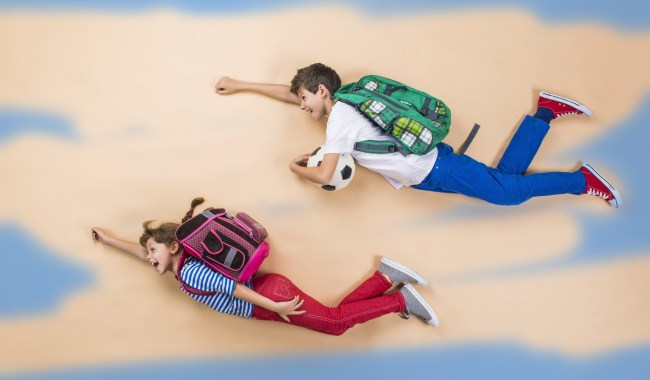 The Trillade elementary school in Avignon, France has been forced to ask students’ parents to stop throwing their kids over the closed gate when they show up late.

According to The Times…

The Trillade primary school in Avignon put up notices prohibiting parents from hoisting their offspring over the 1.8-metre barred steel gate after it is closed at 8.30am.

Sanaa Meziane, the head teacher, said staff were tired of “irresponsible” parents doing so in their rush to work when running late. “Parents arriving after the bell were literally throwing their kids,” Ms Meziane said. She said it was not a regular occurrence but the school needed to take action to prevent accidents.

I’m sorry, but this is hilarious. I would 100 percent do this if I realized it was an option and my kid was late for school. Heck, I would especially do it now since my kids haven’t seen the inside of a school since March. (GOD, IT FEELS WAY LONGER THAN THAT.)

La Provence the signs actually depict a parent throwing their small child over the fence, and ask that parents please wait until the gates are reopened again at 10 a.m. or 3 p.m. to send their children into the school.

One of the signs literally translated reads, “I do not throw my children over the gate.”

Google’s translation of the article states, “The recklessness, even the unconsciousness, of certain parents of pupils did not lead to injuries.”

Wait… the unconsciousness? Did someone knock their kid out tossing them over the gate?

I’m not supposed to laugh at that, right?

Check out the signs that have been posted in the video below. And do your best to try not to chuckle.