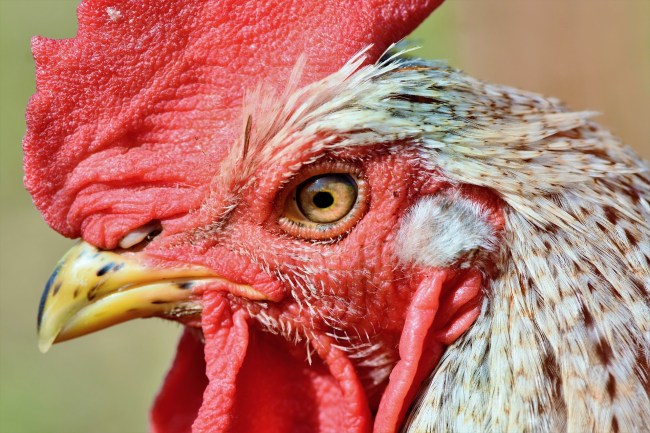 This has been one of the most chaotic years on record. There were the Australian fires, we were almost faced with World War 3, aliens and UFOs made an appearance, murder hornets, an ongoing global health crisis that has claimed hundreds of thousands of lives, and every major city in America has been burning for days.

Given the absolute barrage of alarming news we’re forced to grapple with on a daily basis, it’s hard to be shocked by anything anymore. So when I see this physician and scientist sounding the alarm bells that a future pandemic caused by chickens could wipe out half the population my instinct, at this moment in time, is to just shrug it off with ‘yeah, that certainly seems possible’ and go back to watching the world burn around us. But of the sake of this article, let’s check out what he has to say.

Dr. Michael Gregor recently published his book How To Survive A Pandemic. According to the Post, Dr. Gregor once testified on behalf of Oprah Winfrey in some sort of ‘Meat Defamation’ lawsuit. In this new book, he claims if we were to apply a hurricane-like-scale to pandemics, the current COVID-19 pandemic ranks around a Cat-2 but a future Category-5 could take out half of the world’s population and he believes it could be caused by chickens/the chicken farming industry.

Greger, a vegan, writes that “In the ‘hurricane scale’ of epidemics, COVID-19, with a death rate of around half of one percent, rates a measly Category Two, possibly a Three. … The Big One, the typhoon to end all typhoons, will be 100 times worse when it comes, a Category Five producing a fatality rate of one in two. … Civilization as we know it would cease.”

While environmentalists warned earlier this month that the world would face another stronger epidemic if we continue to have contact with wildlife, Gregor places the blame squarely on chickens.
“With pandemics explosively spreading a virus from human to human, it’s never a matter of if, but when,” Greger writes.

Citing the bird-based Spanish Flu outbreak of 1920, and the H5N1 outbreak in Hong Kong in 1997, Gregor writes, “the worry is that the virus never stands still but is always mutating. … This is the monster lurking in the undergrowth, the one that makes epidemiologists shudder.” (via)

In that 1997 H5N1 outbreak in Hong Kong only 18 humans contracted the virus but 33% of them died. Hong Kong killed 1.3 MILLION chickens to stop an outbreak. As a devout meat-eater, I call shenanigans on this. It sounds like vegan propaganda to me but I’m neither a doctor nor a scientist so I’ll at least listen to his warnings and learn more about the credibility of this threat.

There are currently more than 24 billion chickens in the world. The vast majority of them are cooped up together in incredibly tight spaces (and fed disease-resistant antibiotics). This doctor claims the risk of a chicken-caused pandemic is something that can only be mitigated by changing the entire way the chicken industry operates. By spreading out the farms and eventually doing away with eating poultry altogether which I cannot see ever happening in a million years.

If you’re at all curious about his new book How To Survive A Pandemic here’s the description on Amazon:

From tuberculosis to bird flu and HIV to coronavirus, these infectious diseases share a common origin story: human interaction with animals. Otherwise known as zoonotic diseases for their passage from animals to humans, these pathogens—both pre-existing ones and those newly identified—emerge and re-emerge throughout history, sparking epidemics and pandemics that have resulted in millions of deaths around the world.

How did these diseases come about? And what—if anything—can we do to stop them and their fatal march into our countries, our homes, and our bodies? In How to Survive a Pandemic, Dr. Michael Greger, physician and internationally-recognized expert on public health issues, delves into the origins of some of the deadliest pathogens the world has ever seen. Tracing their evolution from the past until today, Dr. Greger spotlights emerging flu and coronaviruses as he examines where these pathogens originated, as well as the underlying conditions and significant human role that have exacerbated their lethal influence to large, and even global, levels.

As the world grapples with the devastating impact of the novel coronavirus 2019, Dr. Greger reveals not only what we can do to protect ourselves and our loved ones during a pandemic, but also what human society must rectify to reduce the likelihood of even worse catastrophes in the future.

I can’t say I’m personally looking forward to that ‘light reading’ after what the world has been through over the past few months.

You can go ahead and click here to read the full article over on the NYPost.