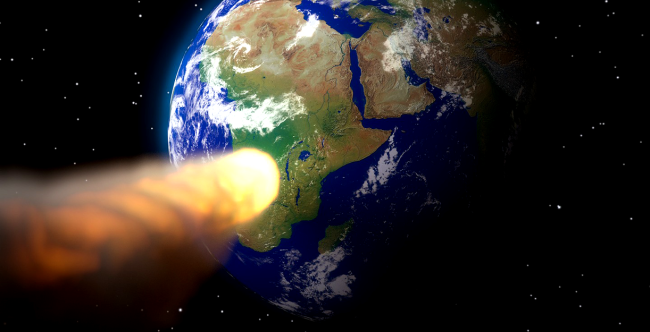 For many years, NASA has categorized numerous asteroids as being “potentially hazardous.” Some of these asteroids have been designated as potential “planet killers.” A “planet killer” asteroid is defined as one that could cause a global mass extinction event.

So far, luckily for us, none of them have actually smashed into Earth.

Unfortunately for us, scientists just discovered another potentially hazardous asteroid, Asteroid 2022 AP7, that they didn’t know existed and this one is more nefarious than most.

The reason Asteroid 2022 AP7 hadn’t been discovered until now is because it was hiding in the glare of the sun.

“Only about 25 asteroids with orbits completely within Earth’s orbit have been discovered to date because of the difficulty of observing near the glare of the Sun,” said lead study author Scott Sheppard of the Carnegie Institution for Science in Washington. “There are likely only a few NEAs [near-Earth asteroids] with similar sizes left to find, and these large undiscovered asteroids likely have orbits that keep them interior to the orbits of Earth and Venus most of the time.”

At 1.5 kilometers wide (0.9 miles), Asteroid 2022 AP7 is the largest one astronomers have discovered since 2014 and likely is one of biggest ever.

For now, Asteroid 2022 AP7 only crosses Earth’s orbit while we are on the opposite side of the sun. Scientists report in a research paper published in The Astronomical Journal that will slowly change.

It could take centuries for this to happen, but if and/or when it does, it won’t be pretty.

“Any asteroid over one kilometer in size is considered a planet killer,” said Sheppard.

If Asteroid 2022 AP7 were to collide with Earth that would all she wrote for humanity.

“The Earth’s surface would likely cool significantly from sunlight not getting to the planet,” Sheppard added. “It would be a mass extinction event like hasn’t been seen on Earth in millions of years.”

No worries though. Sheppard said, “It has no chance to hit the Earth, currently.”

Should that ever change, NASA and other space agencies are hoping that their recent test of slamming a spacecraft into an asteroid, which went much better than when Japan bombed an asteroid, will be enough to change the giant space rock’s orbit and save the planet.