Scientists Believe They Have Determined When Sun Will Explode, Killing All Life On Earth 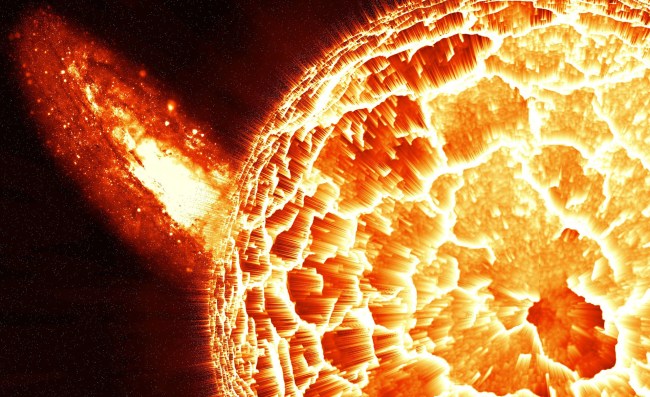 All good things must come to an end – even the sun. Unfortunately, when the sun comes to an end so does everything else in our solar system.

As such, scientists figured it might be important to keep an eye on the center of our universe and see if they can determine exactly when the sun will explode. Not that knowing when it will happen will in any way allow us to stop it.

According to Live Science…

After the sun has burned through most of the hydrogen in its core, it will transition to its next phase as a red giant. At this point roughly 5 billion years in the future, the sun will stop generating heat via nuclear fusion, and its core will become unstable and contract, according to NASA. Meanwhile, the outer part of the sun, which will still contain hydrogen, will expand, glowing red as it cools. This expansion will gradually swallow the sun’s neighboring planets, Mercury and Venus, and ratchet up the sun’s solar winds to the point that they quash Earth’s magnetic field and strip off its atmosphere.

Of course, this will almost certainly be bad news for whatever life remains on our planet by that point — assuming any has survived the 10% increase in the sun’s brightness that is expected to vaporize Earth’s oceans in 1 billion to 1.5 billion years, according to a 2014 study published in Geophysical Research Letters. Within a few million years of this initial expansion, it’s likely that the sun will also consume the rocky remains of the Earth, according to a 2008 study published in the Monthly Notices of the Royal Astronomical Society.

Luckily, after decades of painstaking research, scientists believe that won’t be happening any time soon.

“The sun is a little less than 5 billion years old,” astrophysicist Paola Testa told Live Science. “It’s a kind of middle-age star, in the sense that its life is going to be of the order of 10 billion years or so.”

Testa also explained how they came to this number.

“A lot of the science is relatively new, like in the last century, because an integral part of understanding how a star works comes from understanding nuclear reactions and fusion,” said Testa. “Before the 1930s, one of the main ideas of how stars worked was that energy was coming just from gravitational energy.”

He continued, “By putting together lots of different information from lots of different stars, astronomers and astrophysicists could build a model for how stars evolve. This gives us a rather precise guess of how old the sun is.”

Live Science adds that the sun’s age is corroborated by radioactive dating of the oldest known meteorites at around 4.6 billion to 4.7 billion years.