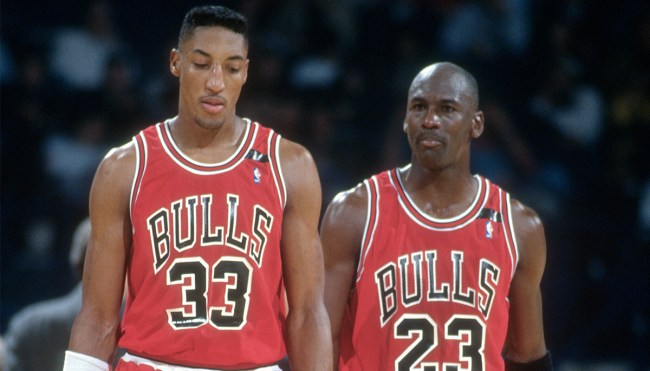 Scottie Pippen has not been shy about voicing his disdain for how he was portrayed in The Last Dance, and over the summer, we learned he took the documentary personally enough to take the time to write a book in the hopes of telling his side of the story.

Following the announcement of Unguarded (the memoir slated to be released on November 9th), Pippen has gradually amped up a publicity tour primarily built on a foundation of throwing ample amounts of shade at Jordan (as well as Phil Jackson for good measure) and providing members of the media like myself with some juicy drama to cover in the process.

Earlier this week, Pippen once again sounded off on The Last Dance by criticizing the series for being the vanity project everyone knew it was but still watched because it was some pretty compelling television. Now, we’ve been treated to an even spicier take via some excerpts obtained by The New York Times where the forward does not mince words when it comes to describing his feelings about Jordan’s first retirement.

Back in June, Pippen labeled Jordan’s decision to play minor league baseball after stepping away from the game that made him famous a “selfish” one while speaking with Dan Patrick. While that seems like a pretty fair assessment, I don’t think the same can be said about his decision to use the “selfish” label in regards to the circumstances of that first retirement, as Pippen says he took issue with how Jordan handled the hiatus that was announced around three months after the death of his father James.

In response to Jordan calling Pippen “selfish” in the documentary for delaying a foot surgery and asking to be traded, Pippen writes, “You want to know what selfish is? Selfish is retiring right before the start of training camp when it is too late for the organization to sign free agents,” a reference to Jordan’s unexpected first retirement after his father’s death.

He calls Jordan hypocritical and insensitive. And he criticizes Jordan for his behavior toward co-workers: “Seeing again how poorly Michael treated his teammates, I cringed, as I did back then.”

I can understand why Pippen was frustrated with the timing of Jordan’s decision, but with that said, it seems like taking aim at someone for taking some time to reflect after their dad was murdered is a bit of a stretch.