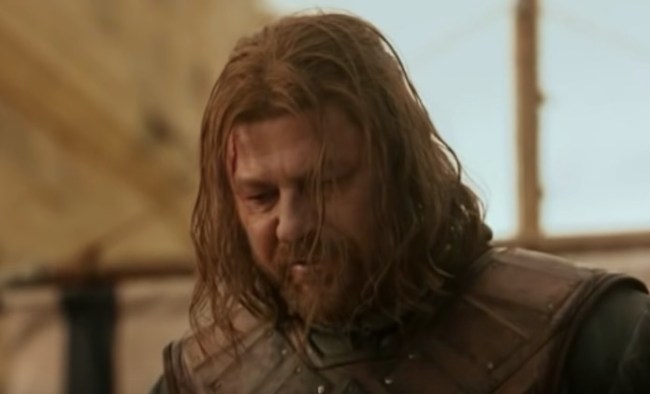 I think it’s pretty obvious that there are some potential spoilers ahead in this article for anyone out there who isn’t caught up on HBO’s Game of Thrones. There aren’t any actual *future* spoilers, I’ll just have to discuss events in the show’s past. Let’s dive in…. In a recent interview with Mashable, actor Sean Bean talked about who he thinks will win it all.

Sean Bean played Ned Stark on HBO’s Game of Thrones for only one season. The Warden of the North was beheaded in King’s Landing by the young King Joffrey and he died in front of his two daughters, Sansa and Arya. This was easily one of the most ‘holy sh*t’ moments in TV history because at the time he appeared to be such a central figure to the show’s plot that nobody could imagine the show going on without him.

But that’s how Game of Thrones goes. The creator, George R.R. Martin, loves building up your favorite characters only to murder them off at the most shocking times. He also loves taking characters who are despised and transforming them into a fan favorite (i.e., Jaime Lannister).

After Ned Stark was murdered his eldest son, Robb Stark, was named the King of the North and waged war against the Lannisters that culminated with the infamous ‘Red Wedding’ where Robb, his mother Catelyn, Robb’s pregnant wife, his direwolf, and others were all blindsided and murdered. Later down the line, the oft-forgotten Rickon Stark was killed while running across a field towards his freedom.

F*ck, can we just take a moment to appreciate how dark Game of Thrones is sometimes?

So who did Sean Bean pick to win the Game of Thrones and be the last Stark standing? Arya Stark. I dig this choice. She’s always been my favorite character. More so in the books than on the TV show because she’s a little bit of a tryhard on TV whereas in the books she was just a silent assassin badass. These days she’s trying too hard to flex on her sister. Here’s what Sean Bean had to say in his Mashable interview.

Now, Bean can only look on from a distance on the show. He’s only caught bits and pieces of the show since his departure, as perhaps one of the only people in the world who doesn’t obsessively watch every Sunday.
But he still has some thoughts on which of his former TV children will make it to the end.

“Who’s left?” he said, jogging his memory of the endless blood bath brought upon his house. “Jon Snow is left, isn’t he? But Arya would have to be it. Yeah Arya will last — maybe she’ll be on the throne.”
With all her assassin training, Arya definitely does have a pretty good shot at surviving the Many-Faced God of death. And doesn’t Queen Arya have a nice ring to it? With all her stealth and disguise skills, she might even be able to give Hitman’s Agent 47 a few tips. (via Mashable)

He really doesn’t watch the show, does he? He sort of missed that whole ‘Jon Snow is not a Stark, he’s actually a Targaryen’ plotline. Or maybe he (as a character) still thinks of Jon Snow as his son since he raised him. The former’s much more likely since it sounds like he doesn’t watch Game of Thrones based on other comments in the interview.

So I haven’t spent much time thinking about how we get from A to B, but here’s how I think Game of Thrones will wrap up:

2) Cersei Lannister will finish the series as the Queen of Westeros but only after being turned into a White Walker. The show will likely end with some sort of ‘ship sailing off into the sunset’ scene where either one or both of Jon Snow and Daenerys Targaryen look back as Cersei’s standing on some platform, blue as ice, looking smug as all hell for winning the bittersweet battle for Westeros.

3) The Hound will kill his brother, The Mountain.

That’s all I’ve got for now. I don’t really have any basis for these theories, they just seem right in my head. George R.R. Martin mentioned in the past that the show will have a ‘bittersweet’ ending so these baseless and probably way-off theories in my head have been concocted around that.

To read Sean Bean’s full interview on Mashable you can click here.