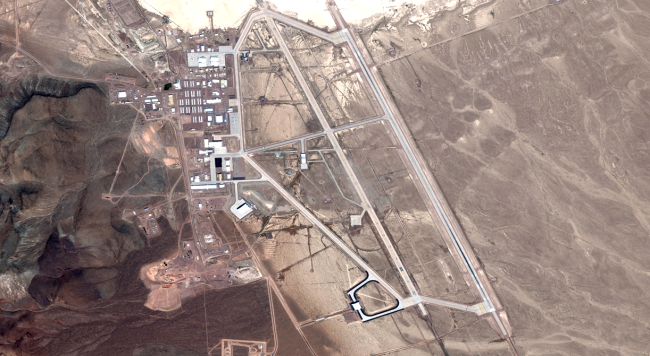 Internet sleuths believe a satellite image may have revealed a secret aircraft sitting outside the giant southern “2014 hangar” at Area 51.

The image was taken on August 1 and shortly thereafter went viral on web sites and message boards related to amateur Area 51 investigations.

After receiving multiple emails from readers about what appeared to be a large flying-wing-like aircraft at Area 51, military technology expert Tyler Rogoway of The War Zone decided to investigate further.

Rogoway is the same person who, in February, reported on a high-resolution Planet Labs satellite image revealed what he called “an exotic delta-shaped aircraft under an unenclosed skeleton-like structure.”

That aircraft was also spotted near the massive hangar located at the remote southern end of Area 51 – a location that he reported garnered little to no activity over the past eight years.

The aircraft in the August 1 satellite image, if it is indeed one at all, is much larger, and appears to possibly be a v-shaped flying-wing design. That is if it isn’t a shadow cast on the ground by a low-hanging cloud. While that seems certainly possible at first glance, the shape of the ‘blob’ and its centering direct on the taxiway in front of the hangar — the exact utility of which remains a mystery nearly a decade after its construction began — makes such an assumption less definite. The blob’s color tone and even what appears to be its shadowed outline also lead one to believe it is indeed an aircraft, not a shadow, but that is far from definitive.

I dare to rule out its a shadow since it doesn't seem to line up with any cloud in the vicinity. pic.twitter.com/ndtaFHPajO

Independent satellite image analyst Damien Symon told The War Zone after studying the image, “Despite the extreme lack of detail in the low-resolution imagery, the observed object could be a possible aircraft wider than the 75 foot wide taxiway it would appear to sit on.”

“That is no cloud, that is for sure,” one person wrote. “Cloud does not perfectly pose itself on run away while there is nothing on either side. And it is extremely hard to classify as aircraft given how big the left wing is compared to right one, considering they are wings.”

“Love this stuff – forget Sasquatch and ghosts, give me super secret mystery planes and space lasers!” another reader commented.

I'm thinking that it's way, way too small to be a cloud with that high a density to make that dark a shadow. No way.

“The personal [sic] at Area 51 are fully aware when a satellite will be over head,” a skeptical reader responded. “There have been times in the past when the fire truck crews would go out and hose an area down in the shape of some weird design for fun. They then read the comments for laughs.”

“B-21 is supposed to be marginally smaller than B-2 (40-ish meter wingspan in lieu of B-2’s 52m),” another person commented. “So this dark shape is at least the correct scale for the Raider.”

That last comment is in reference to the fact that the first B-21 Raider bomber entered the ground test phase in March and was originally supposed to perform its first flight sometime this year.