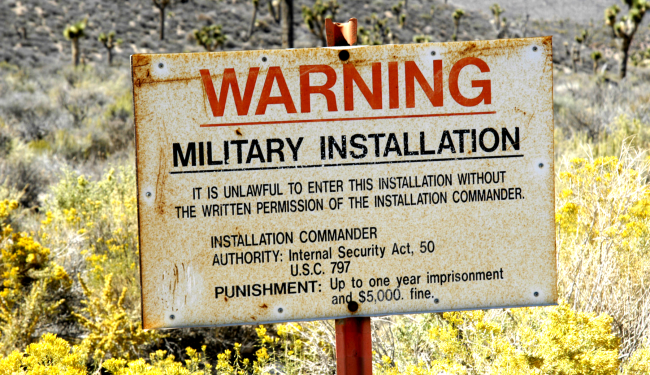 Despite the government’s best efforts to stop it, occasionally someone figures out how to at least get a cursory look at some of the goings-on at Area 51.

Thanks to the development of the internet, there is more information and images related to the highly classified United States Air Force (USAF) facility within the Nevada Test and Training Range than ever before.

With 50 foot tall “alien robots” and numerous other mysterious objects having been caught on camera over the past few years, the public’s curiosity has also never been higher.

This week, that curiosity was piqued once again.

According to military technology expert Tyler Rogoway of The War Zone, for roughly eight years a massive hangar located at the remote southern end of the base has appeared to have garnered little to no activity.

New, unprecedented satellite imagery from Planet Labs doesn’t just show activity around the hangar, it shows what appears to be a mysterious aircraft.

On January 29, 2022, a high-resolution Planet Labs satellite image revealed what The War Zone calls “an exotic delta-shaped aircraft under an unenclosed skeleton-like structure.”

The aircraft has no discernible tail surfaces with what is likely its exhaust extending to the rear and blended with the curved trailing edges of the wings, providing something of a rear apex. Its forward fuselage tapers into what is most likely a pointed nose. There is no doubt about it, this is a fluid-looking design that would likely be very impressive to view close up.

What is this mysterious aircraft spotted at Area 51?

There has been speculation that the mysterious aircraft is a NGAD (Next Generation Air Dominance) demonstrator.

“That is just one secretive program that we know exists and generally matches the description, but there are many others underway we do not know any firm details about,” Rogoway writes.

So, while the aircraft’s planform matches most closely with NGAD’s centerpiece platform, and we know for a fact that type is flying, we have no real idea if it is related to that program. We can’t even say for certain what this aircraft’s objectives are beyond what we can gather generally from its planform and our analysis is still in a very preliminary state.

All that being said, we must underscore that spotting a totally new and exotic aircraft design in the open at Area 51 is largely unprecedented, and for very good reason.

Considering how good Area 51 is at concealing what they want to be concealed, Rogoway suggests that it is possible that “the intention was for this aircraft to be seen.”

Numerous other theories have been bandied about (read the full report here), but none have really satisfied.

“So, while we may have a truly unprecedented satellite image to examine, that’s about all we have at this point,” Rogoway writes. “The rest is just up to speculation. But still, this image serves as the rarest of visual reminders that amazing aviation history continues to be made out at America’s most secretive air base.”