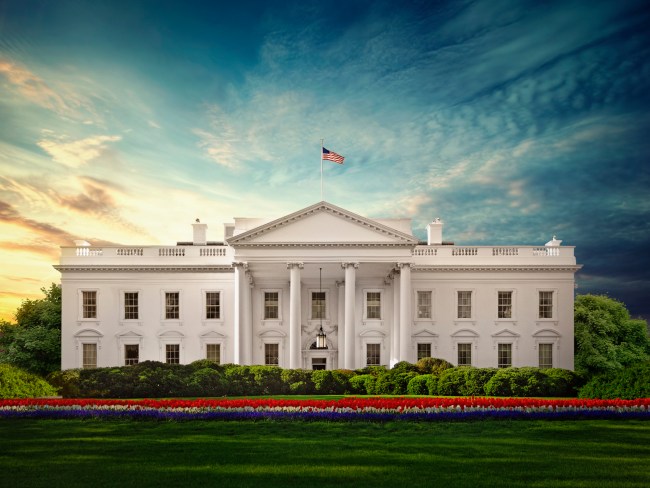 Of course there’s an underground fortress underneath the White House. The more surprising revelation is the fact that the entire White House isn’t an indestructible fortress and someone needs to be hundreds of feet underground in order to be truly safe. It’s 2020, surely we could’ve made that building completely indestructible by now, right?

Few concrete details are known about the bunker underneath the White House that was last in the news in 2018 when a sinkhole emerged on the White House lawn. The Drive published a report back then as a reminder that underneath that sinkhole was a massive interconnected structure of offices and secure shelters, and a bowling alley.

According to the report, the bunker has been there for over seven decades, dating back to the Cold War times when a huge remodel of the White House was done to fortify the structure:

For seven and a half decades, a bunker has sat deep below the East Wing of the presidential estate. And no, it is not the famed Situation Room located in the basement of the West Wing. This is an entirely different and far more secure facility, and it in recent years it was likely augmented by a much more extravagant and modern complex buried deep beneath the western side of the North Lawn adjacent to the West Wing. (via)

With all this renewed discussion over the mysterious White House bunker, Popular Science put together a history of what’s actually known about this secure structure. They discuss how these structures exist all over the country (again, not a shocker) and are built beneath the bedrock in order to survive a potential nuclear blast.

NPR reported in a 2008 book review that the bunker was “one of several Cold War-era nuclear-hardened subterranean bunkers built during the Truman and Eisenhower Administrations, the nearest of which were located hundreds of feet below bedrock in places such as Mount Weather, in Virginia’s Blue Ridge Mountains, and along the Maryland-Pennsylvania border not far from Camp David.”

Get ready for some classic underground alphabet soup. These facilities, including the President’s Emergency Operations Center (PEOC) and Deep Underground Command Center (DUCC), are staffed by the White House Military Office (WHMO), whose soldiers staff the facilities in 12- or 24-hour shifts. (via)

How these structures are actually built in America is something that’s kept secret but PopSci points to the building of CERN’s Large Hadron Collider, a public project, as a way to see how an undertaking like this would happen. The steps in building something like this sound straight-up exhausting, and beyond that, the problem of where to dispose the waste after the building (or fortifying the existing White House structures) is a massive headache by itself.

Because the ‘highest yield nuclear warhead’ is capable of blasting 1,000-feet deep, it’s believed the secret White House bunker is at least that far below the surface if not further.

Here’s what went into building CERN’s Large Hadron Collider, a structure that’s believed to be similar in nature to the underground White House bunker:

To build the compact muon solenoid (CMS), which is one arm of LHC, “a total of almost 250,000 m3 of soil and rock was excavated from the CMS site,” CERN’s website explains. The project manager says on the CERN website that the team found entire archaeological sites during their “trial pits” phase, “because the archaeology of an area is always something we have to consider.” If those materials or artifacts are discovered, any plans need to change by either allowing time for scholarly excavation or changing the location enough to avoid destroying artifacts. Once the site was cleared for construction, the CMS team had to do things like flash freeze parts of the water table so they could build through. To protect nearby workers from radiation and shore up the soft, unstructured native bedrock materials, they built an overall structure with walls more than seven meters thick. And all of it was cleared out a small area at a time by clearing the rubble, “setting” the exposed area with the concrete version of hair spray, and then sending a 12-meter-long steel anchor directly into the bedrock. (via)

Popular Science goes on to state there most likely thousands of enormous underground bunkers across the United States built in places like mineshafts that have already been stabilized and excavated underground, making them easier to convert into luxurious bunkers for high-ranking officials.

Again, not much is known about the secretive White House bunker and for good reason. I invite you to click here to visit Popular Science or The Drive for their full reports on the bunker if you want to learn more.