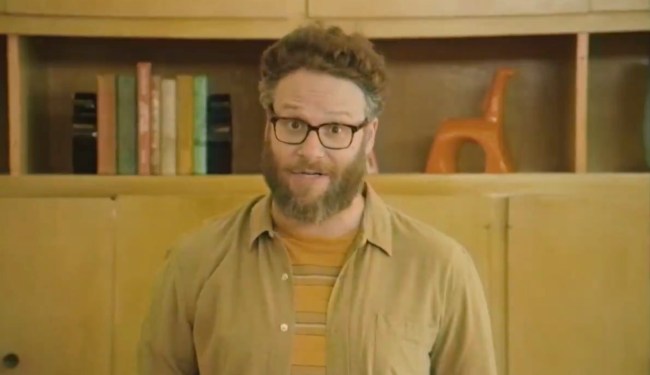 Seth Rogen’s signature marijuana brand, Houseplant, is absolutely exploding right now. Speaking from experience, it’s almost impossible to get Houseplant in dispensaries and delivery services around greater Los Angeles right now. The site crashed when Rogen launched it a couple weeks ago. Sold out almost instantly, with fanboys and laidback cannabis users like myself clamoring to get their hands on Rogen’s personally curated stash of “hand-smoked“, commercially available nugs.

Rogen’s Houseplant cannabis brand has started to expand beyond LA, to dispensaries in San Diego and the Bay Area.

They’re pleasantly analog, like those cheeseball anti-drug VHS PSAs from the ’80s that were played for us millennials ad nauseam during our formative middle school years.

One day this will replace those D.A.R.E videos they cornered us with in school.

Just remember: If you ever find yourself in the weeds with a “maybe you’ve had too much too fast” situation with marijuana paranoia, there’s nothing a little Grateful Dead Europe ’72 can’t sooth. Also: South Park. Lots of South Park.

A lot of people are new to smoking weed, so we made some educational videos! Enjoy!!! pic.twitter.com/6xOi7mQf6f

While we’re on the subject of marijuana and Seth Rogen, I highly recommend the NY Times profile on the comedian and actor, with a specific emphasis on Rogen’s embrace of the 420-lifestyle. This ‘graph in particularly is pretty cool.

Things you love to see: Cannabis changing lives for the better.

Mark Rogen, Seth’s father, told me that his son suffered from an undiagnosed attention-deficit disorder as a kid, until “the miracle of marijuana changed his life — we had him on a strict diet that helped keep him in balance, but it wasn’t 100 percent. Marijuana finally made his cells relax.” Rogen compares his own weed habit to wearing shoes: He could probably make it through a day without it, but “it’s just not how I would prefer to be feeling.” He acts stoned, he directs stoned, he does interviews stoned. Absent the cultural stigma around marijuana, Rogen said, “it’s just a tool we use to make our experience more palatable, and some people need those tools a lot more than others. For me it’s like shoes. For you it might be like sunglasses. Not everyone’s the same. If someone doesn’t need to smoke weed? Great. It’s the same as someone telling me they don’t wear glasses. ‘Mazel tov! You don’t wear glasses. I do!’”

I like the tool analogy. Now I’m going to start thinking about tools during my evening bong-rip-before-dinner.