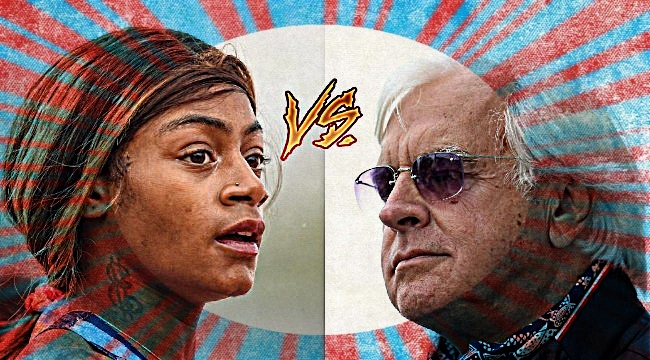 At that age, many of us were still passing out with one shoe on and lighting bags of dog crap on the Henderson’s doorstep because they phoned the police about a noise complaint.

Imagine if at that temperamental time we were robbed of the thing we loved most. Hooters wings or something. We’d take to the streets in our tight graphic tees. It’d be pure bedlam, especially in a time when the valley of victimization rests on an ocean of drill-able oil.

If Richardson’s handling of her omission from the Tokyo Olympics doesn’t present itself as courageous to you, let’s compare it a recent drug test failure on a huge scale: Kentucky Derby-winning horse Media Spirt’s positive test and trainer Bob Baffert’s willingness to die on a hill of piss-soaked mountain of horse hay.

Bob Baffert: In May 2021, the post-race test of Kentucky Derby winner Medina Spirit showed 21pg/mL of betamethasone, a corticosteroid often used therapeutically to assist with reducing inflammation in equine joints, which is not permitted for use within 14 days of a race in Kentucky.

Sha’Carri Richardson: In July 2021, Richardson received a 30-day suspension after testing positive for marijuana weeks before the start of the Olympics.

Bob Baffert initially told media he did not know why the horse had betamethasone in its system and feigned ignorance about the merits of the corticosteroid:

“It’s a…um…I don’t know, it’s an anti-inflammatory … You’re gonna have to talk to the vet.”

Sha’Carri Richardson, America’s ex-best chance at securing it’s first gold medal in the 100 since Gail Devers in 1996, went on the Today Show on NBC, and not only took full responsibility for ingesting THC, but claimed she used it as a coping mechanism for her biological mother’s death.

Sha'Carri Richardson says she smoked marijuana to cope with her mother’s death, “I was trying to hide my pain”

Bob Baffert joined Fox News and attributed his indefinite suspension from Churchill Downs to a toxic consequence of “cancel culture,” claiming it’s a “complete injustice” that he will continue to fight tooth-and-nail.

"We live in a different world now. This America's different." pic.twitter.com/bsQeiV7oXi

Sha’Carri Richardson, who earned the public support of culture-shifters like Cardi B, Dwyane Wade, Seth Rogen and the half-million people who have already signed a petition to have her reinstated, said she’s “accepting” of the situation after being ambushed by a TMZ reporter at LAX Airport.

This is after news broke that Richardson would be left off the Olympic team altogether, despite her 30-day suspension set to expire before the event:

“Honestly, that news didn’t bother me because me and my team were realistic, so we kind of figured that they would say that in the first place,” she told TMZ at the LAX Airport.

“I understand the situation that’s going on. So, I’m accepting of it, and I just know what I have to do moving forward in my career.”

Baffert says one test issue was created by a groom urinating in the stall after the groom had been taking cough medicine. Horse ate some of the hay.

This is not the Onion.

Sha’Carri Richardson made a plea to remove the herself from the spotlight and focus on Olympians who will be living her dream.

Accountability is a road seldom traveled. May we silence our inner Bob Bafferts and channel the Sha’Carri Richardsons inside all of us. And never go full Piss Hay.