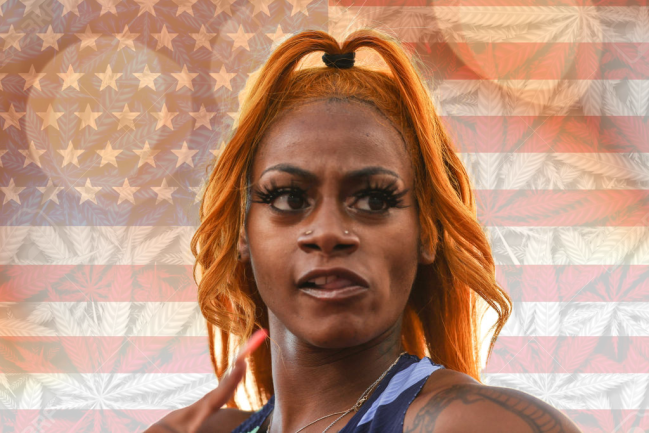 It’s official. The fastest woman in America will not run in the Tokyo Olympics.

Less than a week after testing positive for marijuana, Sha’Carri Richardson was not  selected for this year’s Olympic Team by USA Track & Field. The decision is a cowardly move.

Richardson is only 21 years old and this summer’s Games were bound to be her welcome party on the international level. She is a 100m specialist and absolutely dusted everyone in the U.S. Olympic Trials to punch her ticket to Japan.

Upon her arrival in Tokyo, Richardson would have been a legitimate contender for gold. While her speed is electrifying, her personality is what makes her really stand out.

She runs loud as her blazing orange hair (or whatever color she is feeling that month) catches fire behind her.

Shortly after qualifying for Tokyo, Richardson popped positive for THC. Her drug test WAS NOT POSITIVE FOR TESTOSTERONE OR ANY P.E.D.s— unless you consider weed a performance enhancer drug in track, which I do not.

And neither does Robin Williams.

All I can think about after hearing about Sha'Carri Richardson's failed test is Robin Williams' bit about marijuana being a PED. pic.twitter.com/QKDWYWrZ90

As the narrative surrounding marijuana continues to change around the country, and many parts of the world, athletes should not be tested for THC. Cannabis is a great recovery aide in amid a global opioid pandemic and it helps people take the edge off, much like a six pack after a long day.

If you disagree, I will request that you smoke a blunt and then train for the 100m dash in the morning. If anything, it makes Richardson’s incredible shape even more impressive, like the late comedy legend says.

And yet, athletes are still tested for THC.

Time to get with the times.

Richardson knew that and chose to do so anyway. The positive result led to some outlandish takes from Emmanuel Acho and Claire Lehmann, and it caused people to look back at Michael Phelps.

The greatest swimmer of all-time was photographed smoking from a bong in a British tabloid at the University of South Carolina in 2009 and was suspended for three months. He owned his mistake and did not press charges on the person who leaked the photo.

A college-aged kid was smoking a bong at a college and much of the world couldn’t believe it.

In Richardson’s case, she also owned her mistake with the utmost grace. She admitted to ingesting cannabis after a reporter told her that her biological mother passed away during an interview just days before her Olympic Trials run.

Richardson said that she was “trying to hide her pain.”

A grieving 21-year-old smoked a joint or ate an edible to numb the pain after her birth mom died. One with whom she has a very complicated relationship with, no less.

Opinions on cannabis have changed and while much of the world can believe it, Richardson’s actions are still against U.S. Anti-Doping Agency’s antiquated rules. Her first Olympics were in jeopardy and she had to face the consequence.

Richardson accepted a one-month ban for her positive test. The ban began on June 28 and ended on July 28. That end date is important.

Because the ban ended prior to the end of the Tokyo Olympics, she could have foreseeably been selected for the USA Track & Field team. The ban forced her to miss the 100-meter event, but it would not have prevented her from participating in the 4×100 relay.

To make the U.S. team in a track and field event, an athlete must finish in the top three at the Trials. Richardson lost that opportunity with the positive test and will be replaced.

However, USATF officials can pick at least two athletes for the relay, regardless of their performance at the Trials. Richardson was not chosen.

The U.S. Olympic Track & Field roster is in place for the 2020 Tokyo Olympic Games featuring a bevy of veterans combined with a legion of 81 first-time Olympians set to don the red, white and blue as the Olympic Games take place July 23 – August 8. #TokyoOlympics #JourneyToGold

USATF made a cowardly decision to bend the knee to the World Anti-Doping Agency and the Olympics. The officials said that their integrity would be compromised if Richardson was to compete.

Suspending Sha’Carri for breaking the rules is understandable. Not selecting the country’s fastest woman to compete in the relay is absurd.

Look at her almost run down Southern California in the anchor leg as a freshman at LSU. She was only 19 years old and went pro after the one year in Baton Rouge.

If this decision costs the United States a gold medal, it will be even more embarrassing.

While USATF fully agrees that the merit of the World Anti-Doping Agency rules related to THC should be reevaluated, it would be detrimental to the integrity of the U.S. Olympic Team Trials for Track & Field if USATF amended its policies following competition, only weeks before the Olympic Games.

All USATF athletes are equally aware of and must adhere to the current anti-doping code, and our credibility as the National Governing Body would be lost if rules were only enforced under certain circumstances.

So while our heartfelt understanding lies with Sha’Carri, we must also maintain fairness for all of the athletes who attempted to realize their dreams by securing a place on the U.S. Olympic Track & Field Team.