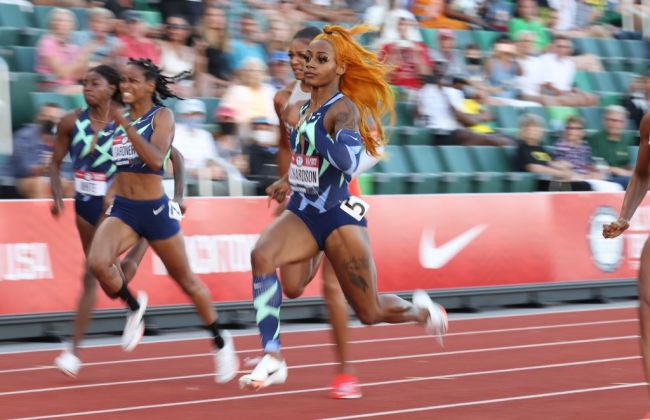 There have been plenty of hot takes going around the Internet following the Sha’Carri Richardson situation but an Australian journalist was somehow was able to draw the ire of fans with her opinion.

Earlier this week it was revealed that Richardson had been suspended 30 days after testing positive for marijuana.

On Friday, Claire Lehmann, the founder of Quillette magazine, randomly suggested that Richardson could be on steroids because he nails are long and strong.

Not sure whether the nails are real or fake, but in case you didn’t know very strong nails & hair can be a side effect of steroid use. pic.twitter.com/qEM7fkmADt

Look, people in track know who is and who isn’t on the roids. Just because they couldn’t ping her on it doesn’t mean they don’t know.

Lehmann then claimed that former U.S. track star Florence Griffith Joyner died of a lifetime of drug use which was quickly debunked by the Internet.

Flo Jo, obvious drug user, had the nails. She died in her sleep at age 38 because that’s what a lifetime of drug use does to the body (and why it’s supposed to be banned from elite sports). pic.twitter.com/H0XqT6ozh9

This is false: "the late athlete Florence Griffith Joyner died of an epileptic seizure and not due to drug abuse, according to her autopsy results released in 1998." @Twitter the tweet below is false and harmful and should be removed immediately. #FloJo https://t.co/HaODe69wnx

My beautiful and talented friend
Florence Griffith Joyner, aka Flo Jo, died from an epileptic seizure caused by a congenital vascular abnormality that caused seizures, NOT FROM DRUGS

I don’t know who you are but keep her name out of your lying mouth. #FloJo https://t.co/xw9LGUR7SO

Lehmann was blasted by the Internet over her hot takes.

😂😂😂😂😂😂😂😂😂😂😂😂😂😂😂😂😂😂😂😂😂😂😂😂😂😂
People log on to Twitter to say ANYTHING!! @clairlemon for a journalist in a spotlight as big as yours you should be embarrassed by how uneducated you are in women beauty. I can’t fathom how one can be so oblivious 🤦🏾‍♂️ https://t.co/ykJhPkbeKT

Step aside Karens, Claire has entered the chat. https://t.co/1Pnb70cfZ0

imagine being so racist that you don’t know what acrylics are. https://t.co/hDm8qERpSN

The nails are acrylic. And women are wearing weaves. Imbecile. https://t.co/OkgRImrJ7n

Claire, SIT ALL THE WAY DOWN!!

You don’t know a damn thing about Black women’s style. But if you seriously think the hair and the nails are real, and thus you can make a claim about “STEROID USE” you are batshit crazy.

Sha’Carri changes her hair and nails for every major https://t.co/eYPsws8bPe

She really tried it. Test positive for weed and 💥…you're dirty for steroids cuz you have long nails use hair dye. 🤷‍♂️https://t.co/iWSawHqsvw https://t.co/YKfTTYHInX