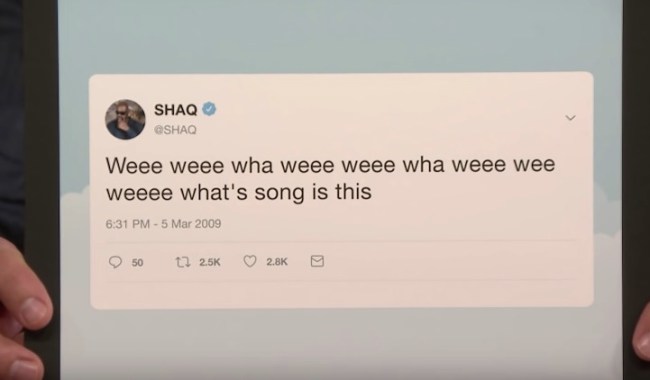 Shaq lives on his own planet, both physically and metaphorically. I watched him appears a guest on the TODAY Show this morning alongside John Cena and Shaq‘s hulking frame made John Cena look like Kevin Hart standing next to LeBron James.

He’s out there too. I still vividly recall Shaq’s episode of MTV Cribs when he was showing off his enormous Superman logo-shaped bed and claimed that he doesn’t own a cell phone. This was years ago, in the pre-iPhone era when Blackberry’s were only just taking off. I’m sure Shaq has an iPhone now (if not several of them) but at the time his rationale for not owning a cell phone was that if Shaq wants to get ahold of you then he will.

Shaq’s been a pretty good follow on Twitter since he first joined (check me out on Twitter at @casspa). Just as he is in real-life, he’s unpredictable and funny at times. Some of his tweets go viral on occasion.

Shaq Trolled The Hell Out Of Charles Barkley At A DJ Gig In Washington D.C.

One of those viral tweets dates back to 2009 when Shaq sent out a cryptic question asking his followers what song he was listening to. Here’s that tweet:

As a guest on The Tonight Show Starring Jimmy Fallon last night, Shaq finally cleared the air regarding that 2009 tweet and now we can all finally rest easily at night. He addresses the tweet about 1-minute into the interview. When asked about the tweet Shaq’s immediate response is ‘did I say something crazy? Oh, I know this’ so it appears as if this is a question he might get asked regularly.

Shaq was all over the show last night. He and Jimmy read some letters from kids and played a game where they stare deeply into each other’s eyes while eating potato chips. Naturally, this required Jimmy to stand on some sort of platform because he’s about 3-feet shorter than Shaq.

By the way, if you didn’t watch that video above and kept scrolling for the answer the song Shaq was tweeting about was Lil Wayne’s ‘Mrs. Officer’ from Tha Carter III.