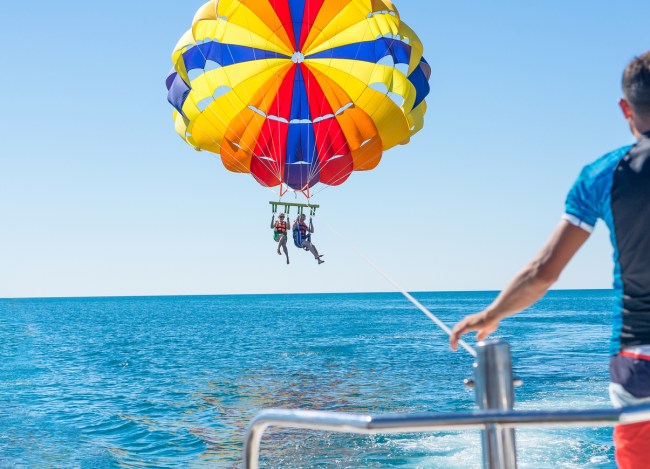 Sharks own the ocean, but they are also capable of attacking out of water as well. Great white sharks can jump up to 10 feet above the surface of the water, and shortfin mako can jump as high as 20 feet. One parasailer learned the hard way that sharks are completely capable of leaping out of the water and he suffered a brutal shark attack.

We take you to the port city of Aqaba in southern Jordan. That’s where a 37-year-old Jordanian man was parasailing in the Red Sea. The man was hovering above the surface of the water when a shark suddenly leaps and attacks the victim.

He was rushed to the Prince Hashem Military Hospital in Aqaba for his injuries. He underwent surgery, and he was said to be in stable condition.

Mohammed Khalil Al Zabada from the College of Marine Sciences said sharks are very rare to the area, and usually frequent only deeper waters of the Red Sea.

“Sharks are found in all the seas of the world, and in the Red Sea there are many types of sharks, but their presence in the Aqaba region is very rare,” he told the Daily Mail.

Mohammad Qatawneh from the Aqaba International Dive Center said, “I’ve been diving for 20 years and this is the first time I’ve heard of a shark attack.” “There are many types of sharks. We have reef sharks, guitar sharks, and many other types but none are dangerous,” he added.

Nayef Al Bakhit, head of the Aqaba Special Economic Zone Authority, announced that there would be a committee to investigate the shark attack.

“The committee will issue a detailed statement about what happened as soon as they complete the investigation,” Al Bakhit said.

Terrifying moment shark jumps out of the water and bites off parasailer's foot pic.twitter.com/TV2uilultt