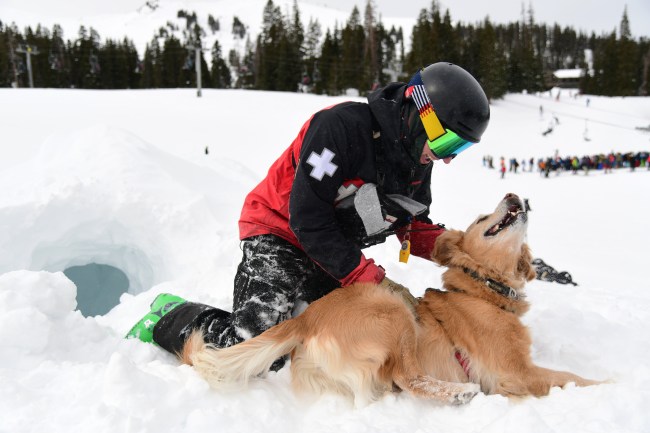 Major changes to the face of skiing this year, as ski patrol has been forced to shave their 10, 20, and even 30-year beards to accommodate mask-wearing on the slopes:

They were losing their beards.

Cammarata, who oversees the ski patrol for an area in the Rocky Mountains west of Denver, had to clamp down on the facial hair so that the patrol could properly wear their N95 respirator masks for protection in the coronavirus pandemic.

But he knew this would be a tough measure to accept for the men on his crew (47 of the resort’s 56 patrollers). For the vast majority of them, beards and the ski patrol go together like snow and the mountains.

This is one of those phenomenons that you don’t register until you read about it being taken away. I hadn’t considered that ski patrol wears beards across the board, but now, after reading this, it’s very obvious to me that I’ve never once seen a ski patrol guy clean-shaven. It’s just as much a part of their uniform as the red jacket and the bulletproof Navy SEAL vest/fannypack rig that never stops squawking.

Which brings me to my next theory: I believe that people with walkie talkie setups purposefully raise them to a high volume and open access to all channels just to remind everyone around them that they’re a big deal. I won’t go so far as to include police officers in this theory, but for everyone else who is issued a walkie talkie, a lot of it is for show. No chance you need that much noise to stay up to speed. Frankly, I don’t even blame them! Do you know how fun walkie talkies are? You hold them diagonally at your mouth, not straight up and down, to be extra cool? That’s cool. That’s the coolest. It’s shocking those Nextel walkie talkie phones didn’t do better.

“It was shocking,” said Hunter Mortensen, a longtime Breckenridge, Colo., ski patroller who recently shaved for the first time in 10 years. “It was like that jumping-in-a-cold-lake-feeling the first time the wind blew.”

“The kneejerk reaction was, how dare you? This is who I am,” Dineen said, preparing to succumb to the razor in the coming days. “I might have to FaceTime with my dad so he can reteach me how to use a razor.”

That second guy hasn’t owned a razor since 2005!!! That’s when I STARTED shaving. Well, I guess I was cutting back my armpit hair before that to stave off puberty out of embarrassment (a losing battle—I developed early) but as far as facial hair goes, that’s a LOT of money saved on Gillette Mach 14 Hydrodildos.

Don’t worry, guys: we still appreciate what you do up there. Even without those frosted facial rugs.