Smash Mouth Mocks All-Star Bryce Harper For Getting Booed By Home Crowd, Immediately Gets Buried Alive By The Internet 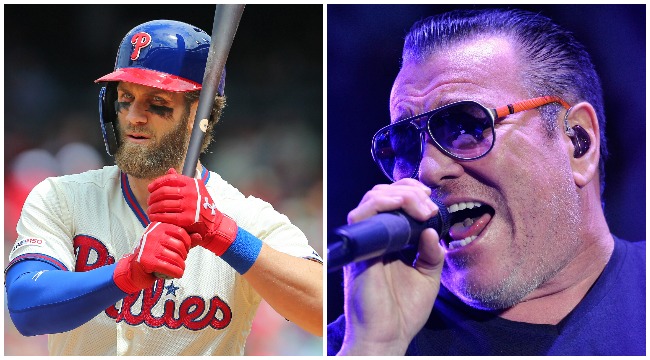 If you’re wondering what Smash Mouth is up to in 2019, head down to your local Elks club and you can find them shredding All-Star on repeat to half-interested baby boomers. When they’re not performing, you can find the band engaging in the pettiest of Twitter spats. Like that time in 2015 when they insisted to anyone who said otherwise that they made Shrek, Shrek didn’t make them.

@TheOGLilB Nope, We already had a #1 hit song on every chart in every Country and AllStar was already top10 on it's way to #1 before Shrek.

Funny because after our first #1 and a Top10 follow-up Shrek wasn't even created yet. #AllOut

The San Jose, California band has declared themselves San Francisco Giants fans several times on the world wide web, and was extremely transparent about their desire to win the Bryce Harper sweepstakes in February.

Harper slipped through their painted fingertips and the band seems to be reveling in the 26-year-old’s recent struggles with the Phillies. Harper was booed by his hometown crowd after going 0-for-4 with two strikeouts and an error in the Phillies 3-1 loss to the Detroit Tigers on Tuesday.

Smash Mouth didn’t hesitate in telling Harper ‘We told ya so.’

Yo Bryce…….told you not to go to Philly jackass! The @SFGiants fans NEVER boo their own players! You we're lead by $ only so swim in the sea of boos now! How much do you love your agent now?? Worth the taxes you avoided? How's that 45min drive to the stadium?lol @bryceharper3

Bllsht! Nuture your players, support your players. That way when they pull through you can feel like you deserved it and you feel like you're part of it. Booing makes you the enemy….NOT part of the team! He's hit 6 HR's and remains a constant threat in the lineup! BAM! https://t.co/od3J8Z6lux

It didn’t take long for Smash Mouth to get owned for their hypocrisy. Some would say they…..walked too close to the sun.

You guys literally told All Stars to get paid. https://t.co/wLeZyyMez0

This tweet is completely contradicts the lyrics to All Star. What happened to “get the show on, get paid”?!

I feel so lied to https://t.co/rdGqd7L7Wk

“Sea of boos?” “45 minutes?” Fake news. I guess you’re not the sharpest tool in the shehh-eeehd. But. Hey now. You’re an all-star. Get your game on. Go play. Hey now. You’re a rock star. Get the show on. Get paid. All that glitters is gold. Only shooting stars break the mold.

Never change, Smash Mouth. I will always love you, so much so that I wrote you into a bit we did with a Sports Illustrated swimsuit model.

Imitation is the finest form of flattery, brother.