Why Winning 100K Slices Of Smithfield Bacon Would Absolutely Rule 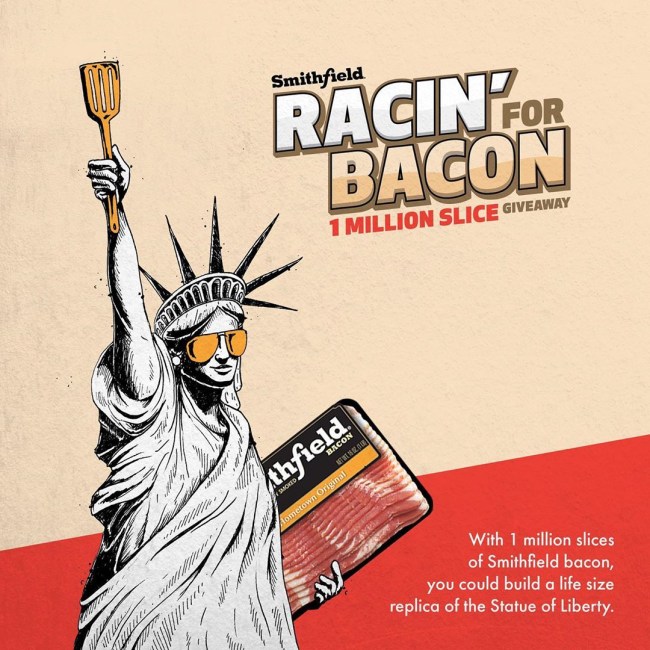 Go ahead and stand up if you like bacon. OK, so now that (presumably) everyone reading this is out of their seat, let’s go over the simple reasons why you’re no longer sitting down.

First, because bacon is badass. It tastes great alone. It tastes great on other meat like burgers. It tastes great in a salad (if you’re into that sort of thing). Second, it’s a man’s snack. With all due respect to those who love avocado toast, bacon brings more of an edge to it. It’s the snack that says you don’t really give a damn about a thing — well, other than good tasting meat. Third, it’s easy as hell to cook, meaning you can toss it on a frying pan and cook it within 5-10 minutes, or you can throw it into the microwave and make it crispy in no time.

For all those reasons above, among others, bacon is the absolute best. And because it’s so damn good, Smithfield wants to hook you up with a ton of it, giving you the chance to win in its Racin’ for Bacon Giveaway, which is a sweepstakes offering one million slices of the tasty bacon. 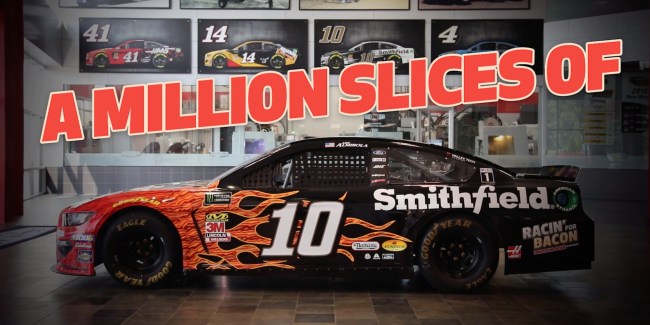 Interested? Oh, we bet you are, so here’s all the info you need to know about the Smithfield “Racin’ for Bacon” contest.

Yep, bringing home the bacon has never been easier in your life. Just enter online, then cross your fingers that Aric Almirola gets the job done — and that you’re one of the 10 lucky winners, giving you 100,000 slices of the sizzlin’ bacon.

So what on earth would you need that amount of bacon for; well, other than eating it. Here are some options we could think up if you win the Smithfield “Racin’ for Bacon” contest — just because we’re really ambitious about this whole thing happening.

1. Use It For Cocktails

Ever have one of those delicious bacon-infused cocktails that seem too good to be true? Instead of spending a fortune on one at a fancy speakeasy, go ahead and try your luck mixing one at home. The good news? If you screw it up, you’ll still have plenty of bacon to munch on.

Sprinkling a little salt on food is good to add some flavor, but imagine doing that with salt that has a hint of bacon to it? Nope, it’s not too good to be true, because, with so much bacon from Smithfield, you can crush cooked strips together with salt and pepper to make this spice. Sounds tasty AF.

3. You Can Make Bacon Furniture

People do some weird things with bacon, guys, but it’s pretty awesome to see some of the ideas they come up with. From bacon lampshades to bacon roses, with all the meat you’ll have at your disposal, you can eat the stuff while starting a new (and unique) hobby.

Now that you’ve got some ideas on what to do with all that bacon from Smithfield, now’s the time to enter its “Racin’ For Bacon Giveaway” sweepstakes, post up on the couch to root on Aric Almirola at Talladega Superspeedway, and cross your fingers that you’re one of the lucky winners. What a time to be alive.