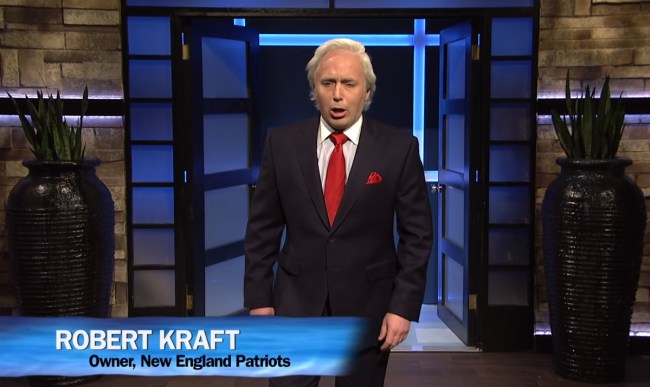 When you’re a celebrity in legal trouble you may want a celebrity lawyer to try to take some of the heat off of you. With celebrities Robert Kraft and Jussie Smollett making headlines for their current alleged crimes, they turn to some of the most popular celebrity lawyers in the world in SNL‘s spoof on Shark Tank.

Robert Kraft, played by Beck Bennett, sought the assistance of the famous lawyers to find the one who could get him off. Kraft is facing charges of soliciting prostitutes at a day spa in Palm Beach, Florida where he allegedly paid $59 for a rub-and-tug.

“Sharks, I am currently in some hot water over an accusation I went to a day spa in Florida and got what turned out to be a not-so happy ending,” Kraft said. “I’m also the only person to ever take a private jet straight to a $59 hand job. I am seeking an attorney who will make sure no one sees the video of my 77-year-old pigskin getting tossed around.”

Another entertaining skit from SNL was the Toilet Death Ejector” sketch where John Mulaney is a salesman for a toilet that catapults anyone who dies on the can and throws them on their bed.