SNL: Will Ferrell Goes All ‘Top Gun’ While Setting The Record For Most Times ‘Clown Penis’ Said 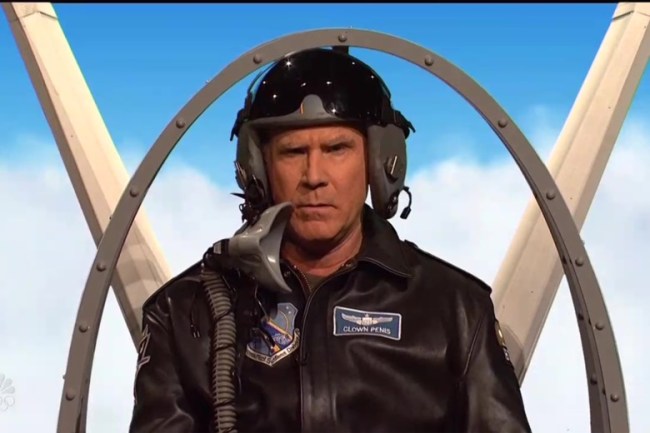 Right now, Tom Cruise is busy breaking his ankle in horrific ways while filming stunts for Mission Impossible 6, but soon after he’s done with that he will be working on Top Gun 2, which is due out on July 12, 2019.

If you can’t wait until 2019 for some high-flying, bogey-busting action check out Will Ferrell’s fighter jet pilot with an unusual name.

In the original Top Gun from 1986, the elite pilots had intimidating and cool names such as Iceman, Viper, Cougar, Wolfman, Maverick, and Hollywood (Sorry Goose).

In this SNL skit, there are jet fighter pilots scrambled to the Korean peninsula including call signs such as Wild Card, Sidewinder, Viper, and Clown Penis. “Clown like the circus, penis like your penis,” Ferrell’s character says.

“When an enemy sees me on his tail, I want him to feel the same way you’d feel if a clown showed you his penis,” Ferrell’s character said. “Confused, unsettled, and most of all, very, very scared. Rest assured, if you see a clown penis – me, or an actual clown’s penis – this just ain’t your day.”

It’s almost like the SNL writers were playing the “Clown Penis Game” and dared one another to see how many times they could get the word “Clown Penis” onto TV. This has got to be a world record for most times “Clown Penis” was ever said in one TV segment.