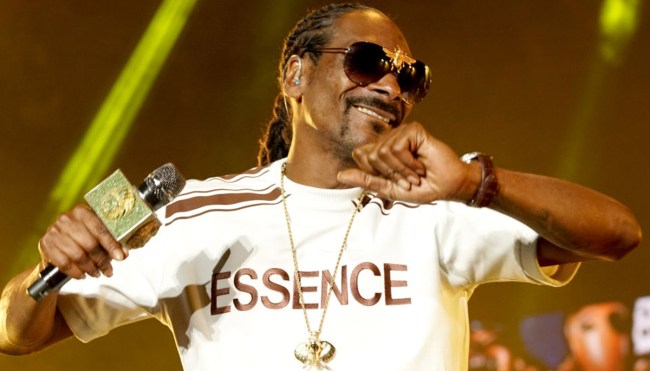 It’s safe to say Snoop Dogg has come a long way since emerging as one of the biggest names on the West Coast rap scene in the early 1990s thanks to his inimitable style and the incredibly raw picture he painted about the gin and chronic-fueled lifestyle he lived in Long Beach.

Over the decades, the emcee has cemented himself as one of the most likable and marketable people in hip-hop while shrewdly capitalizing on his image to make some serious bank. His fairly unlikely friendship with Martha Stewart led to the release of his own cookbook, but he’s also launched some more predictable business ventures over the years—including a venture capitalist fund with a focus on cannabis as well as his own line of gin.

Now, Snoop has turned his attention to another culinary endeavor that we probably should have seen coming, as he recently filed a trademark application for a hot dog brand dubbed…”Snoop Doggs.”

Snoop Dogg is planning to launch a brand of hotdogs called (wait for it…):

SNOOP DOGGS@SnoopDogg filed a trademark application for SNOOP DOGGS back in December.

As Billboard notes, it’s unclear when the world can expect “Snoop Doggs” to hit stores, and there is a chance it may never come to fruition when you consider he also applied for a trademark for an ice cream brand called “Snoop Scoops” in 2011 that never saw the light of day.

My colleague Cass also points out there doesn’t appear to be any photo or video evidence on the internet that proves Snoop Doog has ever actually eaten a hot dog.

He was decidedly turned off by the manufacturing process when he watched how they were made on Jimmy Kimmel Live!, and while Burger King hired him to appear in an internal training video to teach employees how to make hot dogs, he never actually took a bite of the finished product.

As a result, I guess we’ll just have to wait and see how this plays out.