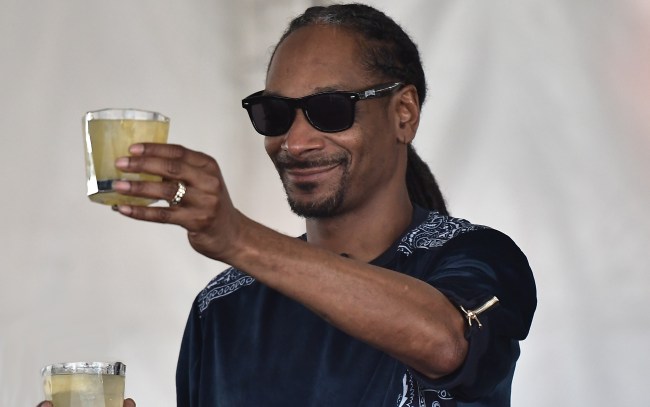 I’ve learned a lot of lessons the hard way over the course of a very committed long-term relationship with alcohol that started when we were first introduced in a parking lot before a Dave Matthews Band concert when I was in high school because I am a cliché. However, we didn’t really become a serious item until I headed off to college, where we got to know each other incredibly well while navigating the ups and downs that come with taking things to the next level.

Based on the extensive amount of research I’ve conducted over the years, I’ve found there’s a direct correlation between how little you can recall about the previous night and how memorable the ensuing hangover is. I have plenty of candidates to pick from when it comes to the most pain I’ve ever felt after an evening filled with bad decisions but none of them stick out like the one made possible by Snoop Dogg.

The fateful night in question occurred on a Wednesday during exam week at the end of the first semester of my freshman year, where a buddy of mine had secured a bottle of Tanqueray to celebrate after handing in his final assignment and asked if I would help him consume its contents before his parents picked him up the next day. I, on the other hand, had one more paper that was due the following afternoon, but I wasn’t going to let that get in the way of helping a friend in need.

When I rolled into his dorm room, I was greeted by the signature green bottle sitting next to the jug of lemonade he’d picked up as a mixer, and upon my arrival, the song he’d appropriately cued up for the occasion started blaring from his speakers.

I’d never tried that particular combination of gin and juice before but I quickly discovered it’s absolutely delightful. At some point, we made the brilliant decision to use the song as a soundtrack for a drinking game where we took a sip every time the name of the concoction in our hands was name-dropped, which happens eight times over the course of it.

The last thing I remember is draining the contents of my cup before I was suddenly transported to the following morning, where I was greeted by a literally crippling hangover. I spent a solid 15 minutes summoning up the willpower to walk 10 feet in order grab the first of five bottles of Gatorade I’d consume that day in search of relief that didn’t come until well after I emailed my professor an assignment I couldn’t even bring myself to proofread because it hurt my brain too much.

I haven’t touched a drop of Tanqueray since then, but unlike another regrettable night involving a $12 handle of rum that resulted in me swearing off the spirit to this day, I’m a pretty big fan of gin and am consequently very intrigued by a new brand from the man who introduced me to a level of anguish I didn’t know existed over a decade ago.

According to The Spirits Business, Snoop spent two years helping to perfect what has been dubbed Indoggo, a gin made with seven botanicals where the obligatory juniper takes a backseat to the orange used in the quintuple-distillation process in addition to the strawberry it’s infused with. As you can guess, it’s designed to pair perfectly with juice but the company behind it suggests mixing the liquor with tonic or throwing it in a glass with some ice and a squeeze of lime if you’re looking for an alternative.

This is actually the second brand of alcohol Snoop has debuted this year, as the man who set a world record when he whipped up the biggest gin and juice ever made in 2018 also unveiled his own label of wine in the spring. If Indoggo piques your interest, it’ll be rolling out on shelves in California later this month but the rest of the country will have to wait until early next year to get their hands on it.