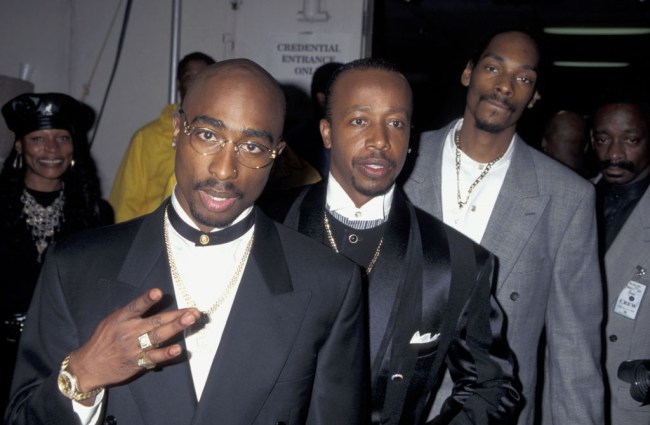 Snoop Dogg has been under fire for his comments he made towards Gayle King three weeks ago. After experiencing some backlash for threatening Gayle King for her interview question about Kobe Bryant, Snoop started his apology tour this week by appearing on Jada Pinkett Smith’s Facebook talk show. But while trying to distance himself from his disparaging comments he made about King, Snoop threw Tupac under the bus.

Following the tragic death of Kobe Bryant, Gayle King interviewed former WNBA star Lisa Leslie, who was good friends with the Los Angeles Lakers legend. In the CBS This Morning interview, King asked Leslie: “It’s been said that his legacy is complicated because of a sexual assault charge, which was dismissed in 2003, 2004. Is it complicated for you as a woman, as a WNBA player?”

Many people saw the question as inappropriate, including LeBron James, 50 Cent, and Snoop Dogg. Calvin Broadus Jr. blasted King in an Instagram video that has since been deleted. “Way out of pocket!” Snoop asked why Gayle, “What do you gain from that?”

Snoop called Gayle a “funky dog head bitch.” The Compton rapper threatened the CBS journalist and told her: “Respect the family and back off, before we come get you!”

Snoop was called out numerous people, including former U.S. ambassador to the United Nations Susan Rice.

“This is despicable. Gayle King is one of the most principled, fair and tough journalists alive,” Rice told Snoop in a tweet. “Snoop, back the **** off. You come for
@GayleKing, you come against an army. You will lose, and it won’t be pretty.”

This is despicable. Gayle King is one of the most principled, fair and tough journalists alive. Snoop, back the **** off. You come for @GayleKing, you come against an army. You will lose, and it won’t be pretty. https://t.co/nUxcYCLS62

RELATED: Will Smith Reveals That He Was Extremely Jealous Of Jada Pinkett Smith’s Love For Tupac – ‘Huge Regret Of Mine’

Snoop, who is a spokesperson for adidas, Burger King, Old Navy, Uber, EA Sports, T-Mobile, Hims, Tostitos, Overstock, and Dunkin Donuts, issued an apology on Twitter. “Had a talk with my momma thank u mamma 2 wrongs don’t make it right time to heal @gayleking Peace n love Praying for u and your family as well as Vanessa and the kids.”

Jada Pinkett questioned Snoop’s “misogynistic behavior,” such as referencing women as “bitches” and “hoes.” Then Snoop transitioned into Tupac Shakur somehow and appeared to throw Pac under the bus.

“Even me and Pac got into it because he was like, he wanted me to stay gangsta,” Snoop said. “I was like, cuz, I got a baby on the way, I just beat a murder case, I have a lot to live for. He had no kids.”

“Pac and I used to get into his usage of ‘bitch’ and ‘hoe,’ we got into it hardcore,” Jada added.

Very convenient for both of them that the iconic Tupac Shakur is no longer with us and can not validate or deny these very woke conversations that happened at the height of the gangsta rap era with the most talented rapper at the time. The late great 2pac died on September 13, 1996.

In 2003, Snopp told Rolling Stone: “I did a Playboy tour, and I had a bus follow me with ten bitches on it. I could fire a bitch, fuck a bitch, get a new ho: It was my program. City to city, titty to titty, hotel room to hotel room, athlete to athlete, entertainer to entertainer.”

Mr. “bitches ain’t shit but hoes and tricks” claimed that he pimped out women to professional athletes. “If I’m in a city where the Denver Broncos or the Nuggets play, I get a couple of they players to come hang out, pick and choose, and whichever one you like comes with a number,” Snoop said. “A lot of athletes bought pussy from me.”

At the 2003 MTV Music Awards, Snoop put two women on leashes and walked them down the red carpet.