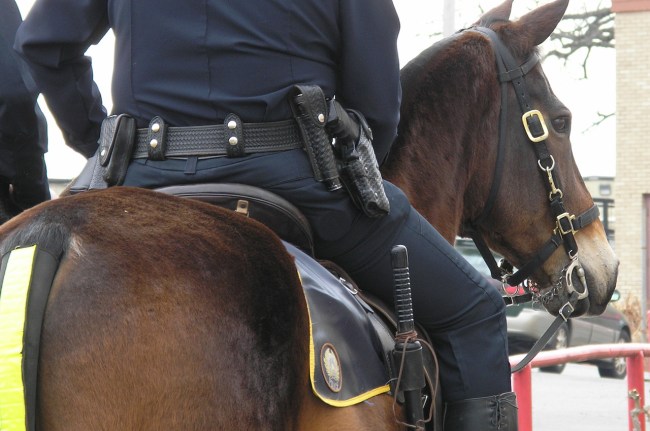 Folks, if you thought Philadelphia Eagles and Oakland Raiders fans were bonkers, just wait until you understand the depths of soccer “hooliganism”.

More so than any American sport, English soccer fans — especially those who root for lower-level clubs — almost have a primal relationship with their team. When they enter the stadium for a match, they turn into animals and remain so until they sober up the next morning.

Take this complete asshole as an example, who decided in the aftermath of Tuesday’s Portsmouth vs Southampton game that his best course of action was to coldcock a police horse.

Police said the 52-year-old man has been arrested on suspicion of animal cruelty after a video showed a fan appearing to throwing a punch at a horse went viral on social media.

The video shows a man in a blue shirt – seemingly in support of Portsmouth Football Club – attempting to hit the police horse after a League Cup clash on Tuesday night.

In the footage of the aftermath of the first match in seven years between bitter rivals Southampton and Portsmouth, the supporter then attempts to run from the horse, but his path is blocked as he ends up in the arms of a group of police officers with riot shields. [Telegraph]

Not only was the dude physically punished for his genuinely pointless crime, but he was arrested on suspicion of animal cruelty and attempted criminal damage.

Let this be a lesson to all of you who order Domino’s or text your ex when you’re drunk — there are a lot dumber things you could be doing, so keep your chin up, kid.