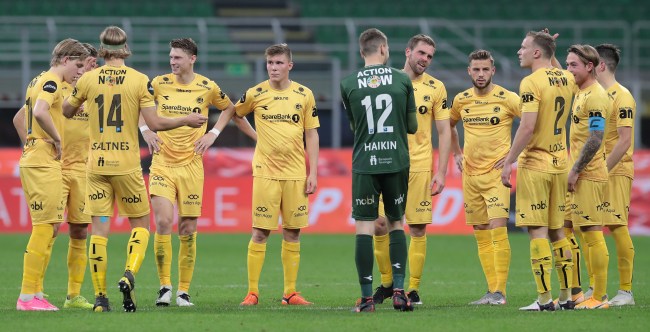 I’m sure that many of you are avid watchers of Norway’s top soccer league, Eliteserien. We get more than a few complaints from our readers about the scarcity of Eliteserien coverage on our site, like hockey fans who complain about Sportscenter’s lack of NHL highlights. Whelp, I’m here to right the ship! Let’s talk about Bodo/Glimt, the team that has taken Norway’s top table by storm:

This has been a golden year for the club. It stands on the cusp of claiming its first Norwegian championship. Despite a budget that is just a fraction of some of its rivals’, it has steamrollered the competition. It has won 20 of its 23 league games and scored an improbable 76 goals — and counting — in the process. It has a slew of records in its sights.

The best perch is on the rooftop overlooking the stadium. Reaching it is not for the fainthearted: The only access is via an external staircase, and most of the field can be seen only if you sit right on the lip of the building. But still, during most games, a handful of hardy fans have made the journey up there.

Before one match over the summer, one group of fans hired a cherry-picker, parked it outside the stadium, climbed into its basket, and then extended its hydraulic arm until they could see the field.

The stunt resulted in a fine for the club, but it was accepted with a laconic grin. The club’s executives understood that nobody in Bodo, a city of 50,000 people just north of the Arctic Circle, a 16-hour drive from Oslo, has ever seen anything like this…

There is a reason fans have had to clamber up that staircase or rent construction equipment: The coronavirus has meant that, for much of the season, only 200 fans have been allowed inside Bodo’s low-slung Aspmyra Stadion for each game. Its largest attendance this year has been 600.

This article is worth reading in its entirety. Just a great feel-good story that will remind you why we love sports. Bodo is currently running away with the league title. They’re a Cinderella story, a bit like Leicester City, except that the Eliteserien isn’t quite the Premier League. But here they are against AC Milan in a Europa League game from September, acquitting themselves well against one of Europe’s most storied clubs.

Their recent run aside, it’s the story of the fans scaling a nearby wall to watch the games that tugged at my heartstrings. This is the magic of sport in a year where watching your favorite team play live has been rare, if not impossible. Yet the Bodo fans seem to have taken a page out of the Wrigley rooftop bars, and combined it with a dash of Alex Honnold, to work around the stadium’s COVID-imposed limitations. And it sounds like the team has responded to the innovative fan-viewing methods by scoring goal… after goal.. after goal.

If I ever find myself swinging through the Arctic Circle, I’ll be sure to catch a Bodo game. Cherry picker rental is on me, boys.