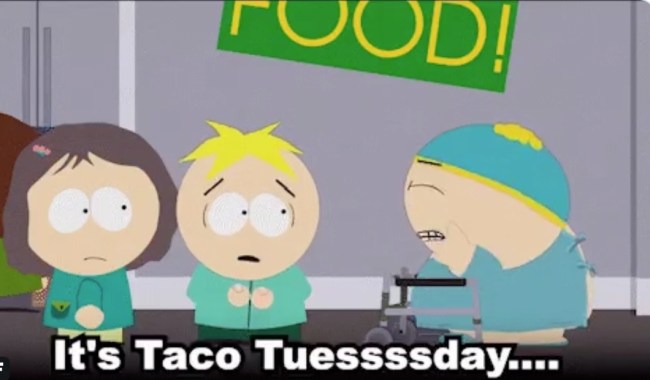 South Park mocking LeBron James and his China comments in their latest episode was a certainty. As soon as he opened his mouth about Daryl Morey, spewed a half-assed comment about freedom of speech and seemingly siding with the NBA after the NBA-China debacle there was no chance South Park wasn’t going to take it and run with it.

In Wednesday’s episode “Let Them Eat Goo,” creators Matt Stone and Trey Parker mocked James in a major way and used a few of his quotes about China.

The episode is about how South Park Elementary School switches their traditional lunch options to healthier ones, which of course makes Eric Cartman very angry. Cartman gets in a fight with the students that protested in favor of the healthy options and says nearly the exact same quote we heard from LeBron when he spoke about Daryl Morey’s tweet.

“Yes, we do all have freedom of speech, but at times, there are ramifications for the negative that can happen when you are not thinking about others and you’re only thinking about yourself,” Cartman said. “They’re trying to change people’s lunch. They don’t realize it harms people financially, physically, emotionally and spiritually.”

South Park wasn’t done mocking LeBron however, later in the episode they took a dig at his ‘Taco Tuesday’ thing and how his failed attempt at trying to trademark the phrase.

It wasn’t just LeBron that South Park went after on Wednesday however. Earlier this month the show was banned from China in which the show’s creators responded with a fake apology saying “like the NBA, we welcome the Chinese censors into our homes and into our hearts.”

They decided to tell the world how they really feel through Randy Marsh in the latest episode. He strikes a big deal with China in the episode but later agrees to back out in order to regain the trust of his former business partner, the beloved Towelie.

This is not safe for work, which you probably knew with the video being title ‘No More Kissing China’s Ass.’