LeBron James Complains About A ‘Difficult Week’ Amid NBA China Controversy After He Shut Up And Dribbled, Gets Absolutely Torched On Twitter 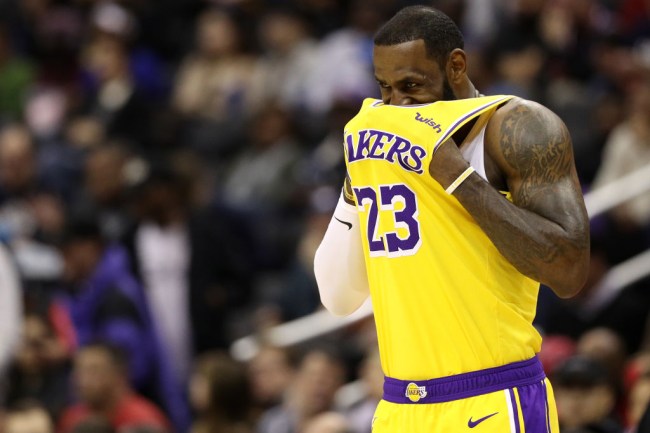 The NBA – China troubles and controversies continue to grow, only this time LeBron James opened his mouth and he’s the center of the newest development.

In case you’ve been living under a rock the past week or so, Rockets’ general manager Daryl Morey sent out a tweet saying “Fight for Freedom. Stand with Hong Kong” two weekends ago essentially expressing his support of major pro-democracy protests surrounding an extradition bill introduced in April.

Fast-forward a day into the NBA’s trip to China and things got ugly, quick. The Chinese government shut down multiple events, disallowed any sort of televised coverage of the preseason games, forbade all media and told LeBron, his Lakers, and the Nets to shut up and dribble and they obeyed.

Seeing as how media was disallowed by both the Chinese government and later the NBA itself, we haven’t heard from players about the Morey tweets and the issues ongoing in China. That changed on Monday night when LeBron decided to speak out.

In his press conference with the media, LeBron said Morey wasn’t educated on the China/Hong Kong situation and that Morey was being selfish when he tweeted out the ‘Freedom for Hong Kong’ tweet.

So, James decided to go with the ‘he didn’t know what he was saying’ card in regards to Morey’s uber-criticized tweet instead of being on the pro-democracy side? Bold.

Moments after the press conference, obviously knowing he chose the wrong words, LeBron sent out the following tweet and said Morey should’ve waited to send the tweet instead of using his rite to free speech when he pleased.

Talk about being unaware. And this is the man that called out Morey for being the uneducated one in the situation? It sure seems like LeBron may need a lesson about what is going on in communist China right now, too.

LeBron James now claims that he had a "difficult week" earning millions of dollars to play basketball because someone promoted freedom for Hong Kong@KingJames, do you think the millions of people locked up in China's communist concentration camps are having a good week? https://t.co/p9pMZ1a2N0

It might be one of the few things most Americans can agree on these days, but LeBron siding with China on Hong Kong (and against Daryl Morey) is a bad look. https://t.co/rodjlBvWlW

LeBron had a week to come up with what to say and he decided to rip an NBA executive who defended democracy. Turns out if you pay him enough LeBron won’t just shut up and dribble, he’ll defend communist dictatorships.

Will Cain of ESPN had a pretty spot-on tweet about LeBrons’ comments.

Lebron has been surrounded by yes men and an adoring media since adolescence. He is a generational basketball player and an admirably charitable citizen. But he has no concept what he does not know. And no one will challenge him. The emporer (“king”) has no clothes.

Cain is absolutely correct here. LeBron has never heard the word no, he’s been given everything thanks to his all-time basketball talent, but this is a bad, bad look for the face of the NBA.

LeBron’s quote about people possibly being harmed financially certainly is rich as he did nothing while in China and like the rest of the NBA, collected a fat check in result of the trip.

“And so many people could have been harmed, not only financial, but physically, emotionally, spiritually, so just be careful for what we tweet, what we say, and what we do,” he added.

It’s incredible to read the comments to LeBron’s latest tweet. It’s tough to find a single soul defending his comments. It’s tough to remember a time when the majority completely went against a superstar like James.

The U.S. is in the middle of a major trade negotiation with China at the moment, by the way.