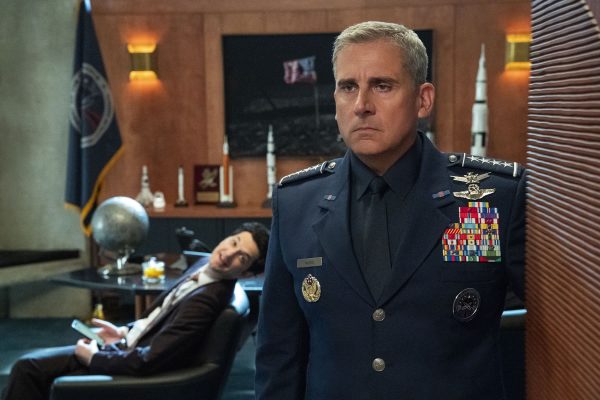 I thought the reaction to Space Force was unfair. While I gave the Steve Carell-starring comedy a positive review, most outlets were not as kind, as the general consensus seems to be that Space Force is all glitz and no substance. How quickly all of these critics have forgotten that the first seasons of iconic comedies such as Seinfeld, The Office, and Parks and Rec didn’t necessarily come out guns blazing, either. But I digress.

Whether or not you enjoyed the actual series itself, you should certainly be able to enjoy this little tidbit of news: according to reports, the unfortunately real “Space Force” branch of the American military may lose its copyright to the hilariously fake Space Force television series.

After Congress appropriated money for his [President Trump’s] vision for a Space Force, and Trump held an Oval Office ceremony to unveil the official flag of the unit, he added that it was high time the country moved to protect strategic American space infrastructure. “As you know, China, Russia, perhaps others, started off a lot sooner than us,” Trump said.

But his administration has proven dovish when it comes to protecting the “Space Force” name itself. On May 29, Netflix premiered its comedy series Space Force, from The Office showrunner Greg Daniels and star Steve Carell. The U.S. military has done nothing to stop the streamer’s satirical take, nor could it thanks to the First Amendment. But less noticed is how, around the globe, the streaming giant has outmaneuvered the U.S. government to secure trademark rights to “Space Force” in Europe, Australia, Mexico and elsewhere.

Meanwhile, the Air Force merely owns a pending application for registration inside the United States based on an intent to use. Meaning that the feds have gotten a place in line but no confirmed trademark rights thus far. [via The Hollywood Reporter]

That just sums up our government in a nutshell, doesn’t it? They spent all of this time spewing hot gas about Space Force and yet no one bothered to secure the copyright laws. Now, the U.S. Government will have to call it the Outer Space Force or some way less cool nonsense like that. The Cosmos Cavalry. The Milky Way Militia. The Astronaut Army.