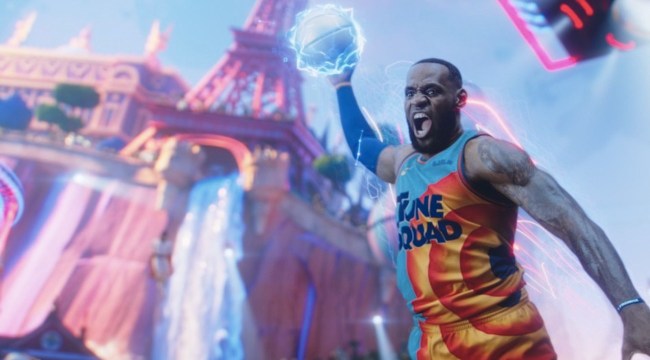 The reviews for Space Jam: A New Legacy — which hits HBO Max and theaters on Friday, July 16 — have hit the internet, and the consensus opinion of the LeBron James-led Space Jam sequel seems to be a vehemently negative one, as the movie current boasts a 38% (and dropping) critics score on Rotten Tomatoes, with critics particularly savaging the overdose of Warner Bros. intellectual property crammed into the project.

That said, while there are a handful of positive reactions to the movie out there, even those relatively favorable responses to the movie seem to be nothing more than a desperate attempt to grasp at straws in order to find *anything* redeeming about the soulless, shameless corporate cash grab.

Take Kristen Page-Kirby of The Washington Post, for example, who categorizes the film as a “feature-length ad for Warner Bros.”, essentially reasons that there’s no point in complaining about the existence of a movie, saying that “there’s no real reason for this sequel/tribute to the original 1996 film to exist, but now that it does, there’s no reason to wish that it didn’t.”

Chris Hewitt of the Minneapolis Star Tribute suggests that because Space Jam: A New Legacy was upfront for its shamelessness, it shouldn’t be docked for it: “Space Jam doesn’t break new ground – for that, we’d need ‘Sylvia Fowles: A New Legacy’ – but there’s something to be said for a movie that delivers exactly what it promises.”

Nick Harley of Den of Geek credits the film for not “falling apart” (real high praise there), thanks to a “clear message for kids, a satisfying character arc for James, and an emotional climax that is acted well enough by the four-time MVP.”

Amy Nicholson of Variety literally says “who cares” in her review, stating: “Did the Goon Squad just dunk on LeBron James? Who cares when our eyeballs are busy identifying a group of rowdy fans as the Droogs from A Clockwork Orange.”

RELATED: LeBron’s ‘Space Jam’ Is Getting Ethered By Critics For Essentially Being A Giant Commercial