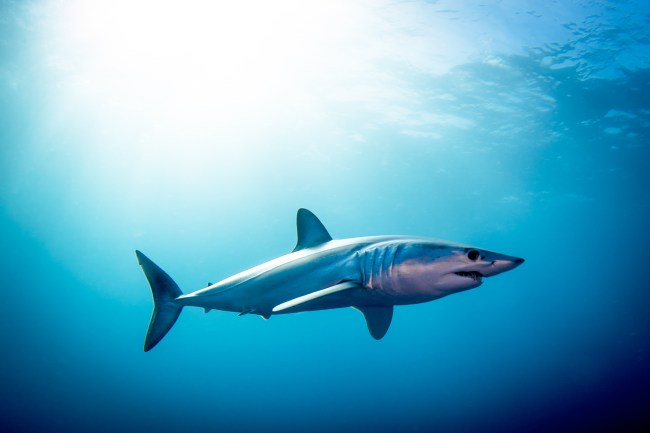 A diver’s knife is first and foremost a tool. It can be used to cut your way out of a dangerous situation if you ever get wrapped up in ropes or undersea debris. Despite the fact that it’s a knife, it’s not really ever thought of as a weapon even though it was used in exactly that manner by a 24-year-old bro who had to stab his way out of a shark attack while spearfishing.

24-year-old Kevin Lloyd was spearfishing in New Zealand’s Cavalli Islands. He’d just shot a Kingfish which is a different species of fish than what we call Kingfish in America but it’s still a fish that can get pretty damn big. That’s when a f*cking MAKO SHARK, one of the fastest creatures on the entire damn planet, popped up out of nowhere.

The Mako Shark can be found in oceans all across the planet. There are several species of Mako Sharks and all of them have two things in common: they’re fast as hell and they can grow to enormous sizes. They don’t typically attack humans, no shark does. But when there’s blood in the water all bets are off.

After 24-year-old Kevin Lloyd shot the Kingfish the mako shark swooped in and latched onto one of this legs. Instead of doing nothing, Kevin pulled out his diver’s knife and stabbed the Mako Shark. If someone stabbed me in this situation I probably would’ve taken off but it just triggered the shark who then turned and latched onto his hand. So, he kept stabbing.

Meanwhile, his friend was pulling on the shark’s tail in an effort to get him off Lloyd. The shark eventually took off. It was apparently not into getting stabbed repeatedly. The friend then helped Kevin Lloyd swim the 650 feet (200 meters) back to their boat and off to safety. Afterward, Lloyd spoke with the New Zealand Herald about his ordeal:

“I started stabbing it heaps with my knife and it didn’t quite like that so it turned around and bit my hand.

“And then I was just trying to get my hand out of its mouth so I gouged its eye with my left hand – this is all while my mate’s holding on to the tail of the shark trying to pull it off me.

“It was pretty lucky because my mate was there. I think it would have been way worse if he wasn’t,” he said.
The shark let go of his hand and swam off into the murky water.

“I was stunned. I couldn’t believe it was happening. We dive with sharks all the time but this shark we hadn’t seen.”
Despite the attack, Lloyd still managed to land the kingfish he had just shot.

“I’m pretty stoked about that. In the whole commotion, my gunline and the fish – the spear was through it – and that was wrapped around me. I started swimming back and it was still there so I grabbed it.”

Saturday’s dive was the first time Lloyd had been back in New Zealand waters since returning from the Pacific Islands with the Navy – where he works in communications. (via)

This Kiwi bloke and his bro sound like they handled a potentially lethal situation like champs. Shark attack are always a very real concern when spearfishing because after you shoot a fish you’re then tethered to the dead fish that’s now spreading blood in the water. If there’s any sharks in the area at all they’ll pounce on that scent in an instant.

I’m sure the shark was going for the fish and just got confused but that still put the dude’s life on the line. If he didn’t have the presence of mind to use his diver’s knife he very well could’ve been dead. And if his friend wasn’t there to help there’s no telling what could’ve happened.

All in all, just a wild story. And a reminder to always be prepared out there. He said he’s not cautious about getting back in the water despite the attack because he sees sharks regularly and understands the inherent dangers of spearfishing.

He DID manage to land that Kingfish he shot which is similar to what we’d call a Yellowtail in California. For a picture of him with his prize catch after surviving the shark attack, you can click here to visit the New Zealand Herald.