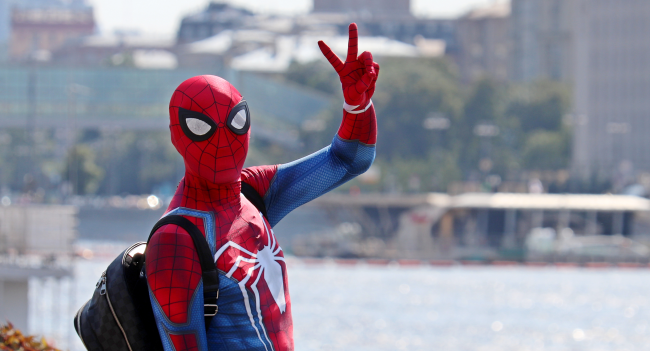 A man dressed in a Spider-Man costume broke up a fight near 42nd Street in New York City as onlookers cheered him on while Batman just stood there, watched, and filmed it.

Video of the encounter, shared on TikTok by user @diice_queen_ofkarma, shows a shirtless bald man walking down another man he appeared to be very angry at and threatening him with some sort of metal pole.

“Why is he….? Oh my God,” she says as the man with the pole approaches the other guy.

Just as he reaches the other man, Spider-Man jumps in and snatches the pole from the man.

“And look at Batman,” she says, pointing her camera at the Dark Knight, standing there holding his phone.

“Today is gonna be a good one,” said the man who cheered on Spidey once things calmed down.

Viewers of the video, which has now been watched over half a million times, loved Spider-Man’s quick thinking in defusing a potentially volatile situation.

“Spider man the hype was real,” commented one viewer.

“tony stark would be proud,” another wrote.

They, however, were very disappointed in Batman’s inaction.

“Batman over here like: ‘Not my city, Not my problem,'” wrote another commenter.

“Batman only works at night,” wrote another viewer.

Now we just need to find the videos that were shot by the man cheering on Spider-Man and, of course, the one taken by Batman.

“Batman been real quiet since this video dropped,” someone commented.