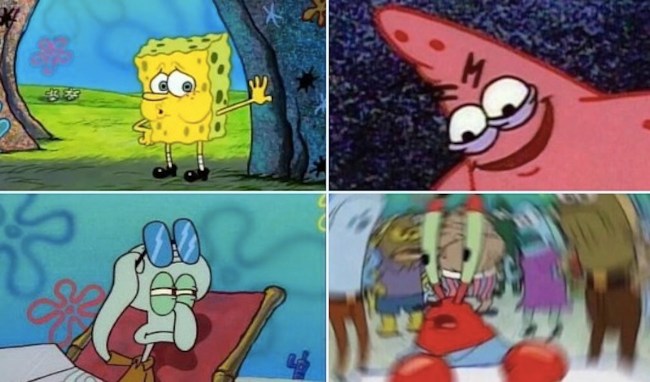 Were you a SpongeBob SquarePants kid when you were growing up? Truth be told, I wasn’t.

Now, to clarify, while I obviously watched tons of SpongeBob like any normal child growing up in the late 90s and early 2000s, it was far from my favorite Nickelodeon cartoon, as that title was held by The Fairly OddParents, the *true* GOAT of early millennium children’s cartoons. Something about SpongeBob just rubbed six-year-old me the wrong way. Learn to fucking drive man.

Despite my personal distaste for Mr. SquarePants, there’s no denying he’s arguably one of the most iconic characters — animated or otherwise — of the last quarter-century. SpongeBob’s immense fame spans far beyond the television screen, though, as it’s recently been reported that a SpongeBob meme hits the internet every five seconds.

SpongeBob SquarePants and his undersea friends are mentioned or turned into a meme every five seconds.

Yes, that's a real stat, and it's part of the reason the company sees Nickelodeon as a priority for Paramount+ @ElizabethElkin reports https://t.co/OOQVDjGHxV pic.twitter.com/8ABHPnIhzf

Though the franchise is over two decades old, it’s more important than ever to ViacomCBS, which owns the kids network Nickelodeon, as the cable empire tries to prove it can do more than just tread water in the vast ocean of streaming.

SpongeBob “in many ways is the centerpiece of our strategy, pairing a beloved library with brand-new takes on beloved characters,” Brian Robbins, president of kids and family entertainment for ViacomCBS, said at an event to promote the company’s streaming services last week. [via Bloomberg]

Given SpongeBob’s truly mind-boggling internet presence, it makes sense that Paramount would invest so heavily in the character and children’s content in general. Even my beloved Fairly Odd Parents are returning, albeit in a more slightly horrifying form, as Paramount announced the upcoming reboot would be in live-action, which is… I don’t know. I try not to sound all “old man yells at cloud” about these things, but something 3D, CGI-created Cosmo and Wanda feels like it was borne out of my nightmares.