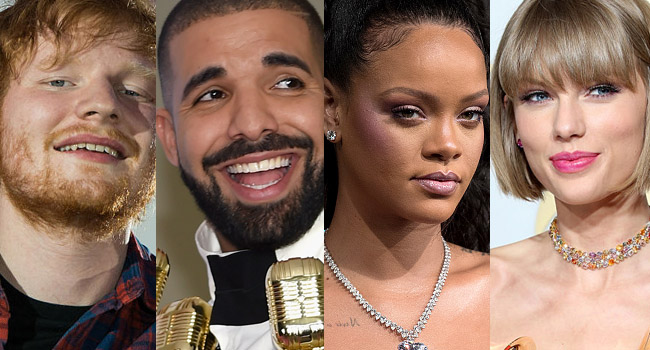 As we mentioned earlier today with the list of the most retweeted tweets of 2017, tis the season for year-end lists. One of those lists that we most look forward to seeing each year is Spotify’s “Year In Music.”

Let’s take a look at what (and who) we’ve all been listening to in 2017, as well as find out about a few musical gems we may have missed out on this year, shall we? We shall.

“Ed Sheeran absolutely dominated this year with the release of his record-breaking album, Divide,” said Stefan Blom, Spotify’s Chief Content Officer. “There is no doubt that 2017 was The Year of Ed Sheeran, and we are thrilled that so many millions of music fans have discovered, listened to, and shared his music on Spotify. Congratulations to Ed on an amazing achievement.”

Spotify also reports that Latin music-listening increased by 110% with “Despacito” and “Mi Gente” both hitting number one, plus 10 other Latin songs making Spotify’s Global Top 50.

The full breakdown below of this year’s rankings and musical trends including the top playlists of 2017, Year in Music playlists, videos, and more can be viewed here.

Also, for all you regular users of Spotify, their annual Wrapped playlist feature is now officially live so you can check out your very own personalized list of most-streamed artists and songs of 2017.