VIDEO: Astronomers Watched A Star Explode Into A Fiery Supernova In Real-Time For The First Time Ever 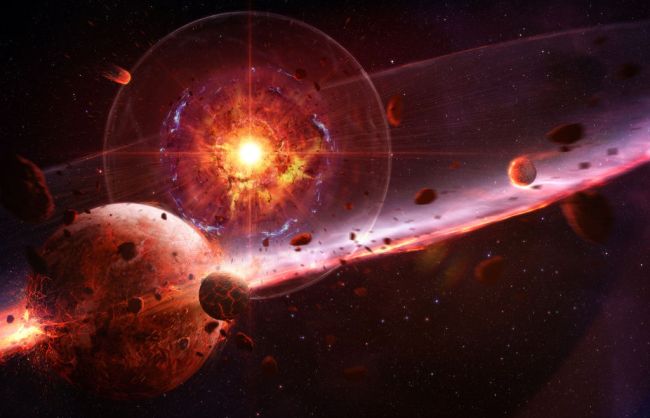 Astronomers have witnessed a giant star explode into a fiery supernova for the first time ever. The astrological event has been recreated in an incredible video recreation.

In the summer of 2020, astronomers began targeting a red supergiant named “SN 2020tlf” located about 120 million light-years from Earth. The dying star began flickering with bright flashes that indicated that it was about to explode and become a Type II supernova.

SciTechDaily reported, “Red supergiant stars eject material prior to core collapse. But that material ejection takes place on much longer timescales than SN 2020tlf. This supernova emitted circumstellar material (CSM) for 130 days prior to collapse, and that makes it a bit of a puzzle. The bright flash prior to the star’s explosion is somehow related to the ejected CSM, but the team of researchers isn’t certain how they all interacted.”

Researchers utilized two high-powered telescopes in Hawaii — the University of Hawaii Institute for Astronomy Pan-STARRS1 telescope and the W. M. Keck Observatory on Mauna Kea. For 130 days, the astronomers monitored the flickering star. Then, out of the blue, the star exploded. This was the first time in history that humans had witnessed a giant star explode into a fiery supernova.

“We’ve never confirmed such violent activity in a dying red supergiant star where we see it produce such a luminous emission, then collapse and combust, until now,” study co-author Raffaella Margutti – an astrophysicist at UC Berkeley – said in the statement.

“This is a breakthrough in our understanding of what massive stars do moments before they die,” explained Jacobson-Galán – an NSF Graduate Research Fellow at UC Berkeley. “Direct detection of pre-supernova activity in a red supergiant star has never been observed before in an ordinary Type II supernova. For the first time, we watched a red supergiant star explode!”

“Scientists have observed red supergiants before they go supernova, and they have studied the aftermath of these cosmic explosions — however, they’ve never seen the whole process play out in real time until now,” LiveScience reported.

RELATED: Supermassive Black Hole At The Center Of Our Galaxy Could Be A Time-Traveling Wormhole According To Scientists

The research published their findings in the Astrophysical Journal on Jan. 6.

“This is a breakthrough in our understanding of what massive stars do moments before they die,” noted lead study author Wynn Jacobson-Galán – a research fellow at the University of California. “For the first time, we watched a red supergiant star explode!”

It should be noted that a red supergiant star can be 100 to 1,000 times wider than our sun is today.

“Given the progenitor mass range derived from nebular spectra, it is likely that the enhanced mass loss and precursor emission are the results of instabilities deeply rooted in the stellar interior, most likely associated with the final nuclear burning stages,” the paper concluded. “Energy deposition from either gravitational waves generated in neon/oxygen burning stages or a silicon flash in the progenitor’s final ?130 days could have ejected stellar material that was then detected in both pre-explosion flux and the early-time SN spectrum.”

“I am most excited by all of the new ‘unknowns’ that have been unlocked by this discovery,” added Jacobson-Galán. “Detecting more events like SN 2020tlf will dramatically impact how we define the final months of stellar evolution, uniting observers and theorists in the quest to solve the mystery of how massive stars spend the final moments of their lives.”

RELATED: Physicists Claim To Have Discovered Fifth Force Of Nature That Could Explain The Mystery Of Dark Matter