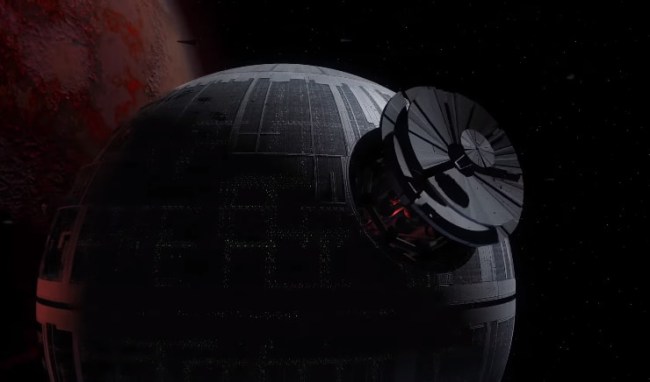 The DS-1 Orbital Battle Station, better known as the Death Star, is the most powerful weapon in the universe. The planet-obliterating deep-space superlaser is a major part of the Star Wars movies. We all know how the mobile battle station is destroyed, but have you ever wondered how the moon-sized was possibly created? The construction of the Death Star is barely shown in Rogue One, A New Hope, and Return of the Jedi. You are in luck because a Star Wars fan made a very intriguing Death Star construction timelapse video.

Brothers Isaac and Benjamin Botkin created the masterful video as well as original music that is John Williams-esque. The impressive duo dreamt up and conceptualized how the Galactic Empire would have created the massive and ambitious Project Stardust. They utilized Lightwave 3D to create the incredible visuals. Seeing how much resources, excruciating work, and the mind-blowing amount of $22,452,000,000,000,000,000 that it would take to construct a Death Star, one would wonder why the Galactic Empire would ever sanction ever trying to make a second Death Star.

Now let’s look at the deconstruction of the Death Star in two seconds. Thanks a lot, Rebel scum.