Stephen A. Hangs Up On And Banishes A Caller To Hell For Suggesting That Carmelo Sign With the Knicks 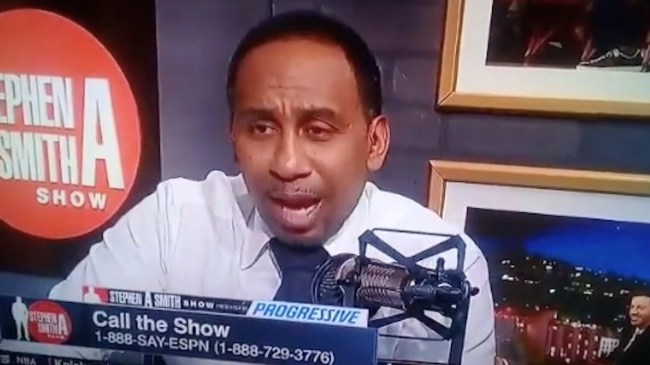 Stephen A. Smith is having a moment.

Yes, the man’s entire career has been built around having these “moments”, but what’s happening in the NBA — the league Stephen A. is most connected to and knowledgable about — right now is historic and unprecedented, and Stephen A’s performances have lived up to the hype.

That’s what separates Stephen A. from the rest of the ESPN roster and makes him their highest paid employee: he’s not just a journalist, he’s not just a television and radio host, he’s a performer.

The same way stand-ups perform at comedy clubs and DJs perform at festivals, Stephen A. Smith performs on ESPN.

And from the moment Kevin Durant announced that he would be signing with Brooklyn and he realized the Knicks were walking away from free agency empty handed, Stephen A. has been putting in Daniel Day-Lewis level acting.

Beginning with a Hall of Fame appearance on The Jump, ESPN has made sure to get the man in front of a camera every opportunity they have with hops of getting a result like this:

STEPHEN A. IS A LEGEND 😭 pic.twitter.com/wt5eYXC2ND

Then came his scheduled weekly appearance on Get Up, where he delivered what amounts to a Shakespearean soliloquy about the New York Knicks’ own incompetence and constant self-sabotage.

Followed by his usual hosting duty of First Take, where he was forced to take shit from co-host Max Kellerman and Charles Barkley:

Because KD and Kyrie went to Brooklyn, @stephenasmith says "it's over" for the Knicks. pic.twitter.com/dgpT4eRtm3

So, by the time his mid-afternoon radio show rolled around, Stephen A. was at wit’s end when a caller suggested that currently-out-of-the-league Carmelo Anthony re-sign with the Knicks, as he promptly told the caller to “go to hell” before hanging up on him.

This is incredible, man. GO TO HELL!!!pic.twitter.com/24fydTY9VN

It just goes to show that Stephen A. has got it all figured out, though: if you’re going to be miserable, may as well get paid $8 million a year for it.