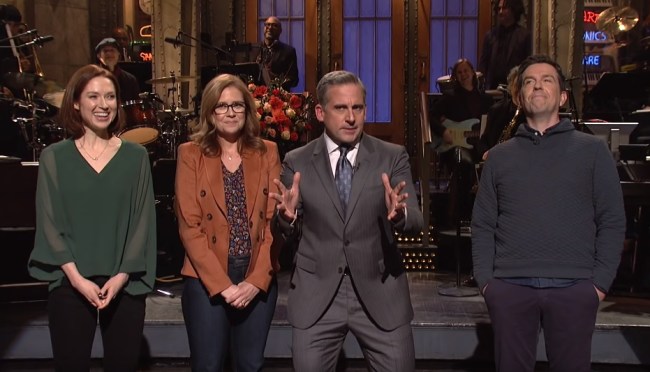 Last month, Steve Carell said that he has no interest in doing a reunion of The Office because the PC police would take away the classic TV show’s edge and he “loves it too much to ever want to do it again.” Four months ago, John Krasinski said he was up for an updated The Office so he could see what Jim was up to. Now, other actors from The Office are weighing in on whether there should be a new The Office.

Steve Carell hosted Saturday Night Live this week and his monologue turned into a mini The Office reunion. “Actually, I don’t think so, it was a great experience and I love all this people but I just don’t think it’s the best idea,” Carell said of a possible reboot when asked by an “audience member.” “I think maybe we should just leave it alone.”

Despite The Office going off the air over five years ago, there is an overwhelming amount of people who want a The Office reboot including Carell’s co-stars Jenna Fischer, Ed Helms, and Ellie Kemper who have millions of reasons for a new The Office.

“People would really love to see an Office reboot,” Kemper, who played receptionist Erin Hannon, told Carell. “‘Cause I need that money. Let’s get that money, Steve!”

“I just don’t think you understand just how much money we’re talking about. Like, you wouldn’t have to do all those sad movies anymore,” Helms AKA Andy Bernard informed Carell.

“Steve, do you remember the last words that Pam secretly whispered to Michael as she left for Denver? asked Fischer, who was of course was Pam Beesley. “‘Steve, don’t be a dick, do the reboot.’”

Even Carell’s two kids and wife Nancy, who had a guest role on The Office as a real estate agent and Michael Scott’s girlfriend Carol Stills, wanted Steve to reboot The Office, “We think you should probably do the show” even if it meant long hours away from his family.

During his SNL hosting duties, Carell also appeared in several skits as a wide variety of characters such as space travelers celebrating Thanksgiving with aliens, an RV enthusiast who drags his wife all around the country, a creepy dad who sings to teenagers, a weird Friendsgiving guest who sings the “famous Thanksgiving song,” a NASA astronaut live-streaming from the International Space Station, and a dopey dad whose wife is cheating on him with his boss that took his kids to Disney World.