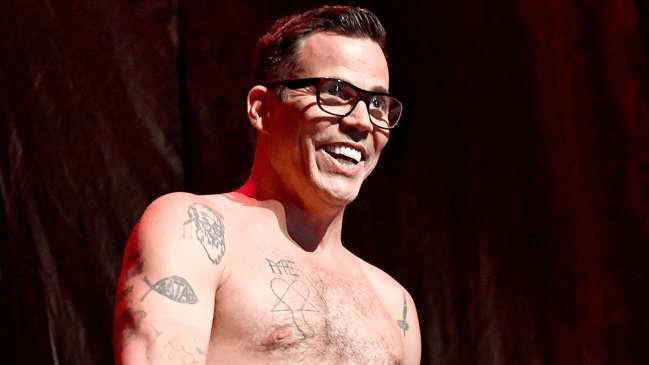 During his 48 years on the planet, Steve-O has routinely and voluntarily subjected himself to more pain and suffering over the course of a few weeks than most people will experience over the course of their entire life thanks to the many ill-advised stunts he’s attempted as a member of the Jackass crew.

After all, we’re talking about a guy who has:

The legendary glutton for punishment has spent plenty of time reflecting on some of his more dangerous feats and the many, many times they’ve resulted in him ending up in the hospital, but it would appear there’s one particular one that stands out when it comes to the most painful experience he’s ever been forced to endure.

According to Yahoo, the Ringling Brothers and Barnum & Bailey Clown College graduate reflected on the wild ride he’s taken through life in the new memoir A Hard Kick in the Nuts, which includes a revelation about a stunt he attempted for a comedy special in 2017 that backfired in a big way—one that he dubbed “Fire Angels.”

The concept was fairly straightforward, as it involved Steve-O doing snow angels—only the snow was replaced by rocket fuel that was subsequently ignited, which ultimately ended with him dealing with third-degree burns all over his body:

“There’s all kinds of stuff I regret having done in my personal life where I did harm, but in my professional life, whenever I’ve done harm to myself physically, that’s generally translated to great footage and a great story.

The time when I laid down in a bit of rocket engine fuel and had to have skin graft surgery on 15 percent of my body… that story was so epic that footage is so, like, I like to think iconic…

My overdeveloped need for attention outweighs my desire for comfort. I didn’t go to the hospital for five days and it was the most horrific five days of my life.

I absolutely don’t regret that.”

If you’re curious, you can view some footage of the aftermath here, but be warned: it’s not for the faint of heart.