Steve-O Shares His 10 Worst Stunt Injuries, And Of Course, There Is Video 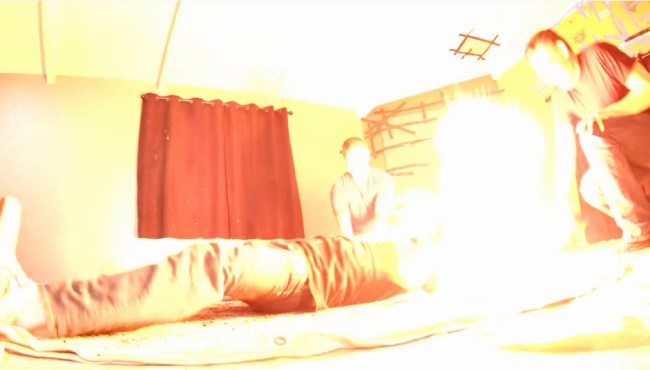 When it comes to doing really stupid stuff (and making money from it) Stephen Gilchrist Glover, better known as Steve-O, has set the record for longevity.

Following his graduation from the Ringling Brothers and Barnum & Bailey Clown College in 1997, Steve-O began performing stunts as a clown in a circus at the Fort Lauderdale Swap Shop flea market.

He followed that glorious gig up by landing the job that made him famous: being a human test dummy on the MTV series Jackass.

Five films, multiple tours, a rap album, several felonies and misdemeanors, and a couple of visits to a mental institution later, Steve-O is back with what a new Gnarly Comedy Special that’s now available on his website.

To promote said stand-up comedy special, Steve-O has compiled a video of his 10 worst stunt injuries. A video he says he has been “looking forward to putting … together for a long time.”

Ranked from bad to how did he even survive, the stunts go like this…

9) Falling into Burning Coals
“That was the first time I had to go to the hospital after I got sober, so I had no painkillers or anything.”

8) A “Legendary” Night in Miami
“I was walking around with my toe not even connected to my foot, it was so dislocated.”

7) Being Pushed Off a Van in a Trash Can
“I fell over and landed on my collar bone. I didn’t even go to the hospital for a few days.”

6) Tubing
“My leg hit something in the water so I went to the hospital and they were like, ‘Oh, wow, you need surgery.”

5) Fire-Breathing Back Flip
“I remember I had all this skin on my face rolled up like a joint.”

4) Being Pushed Down a Flight of Stairs on a Bellhop Cart
“A very minor fracture, but a broken back.”

3) Keg Party Balcony Jump
“Way back in the ’90s when I was just a homeless kid with a dream, I used to throw myself off of balconies.”

2) Porta-Potty-Car Smash-Jump on to a Skateboard
“They put 11 screws and a plate into my ankle.”

1) Blowing Up His Living Room With Him in It
“I had never had anything more terrible happen to me in my entire life.”

Warning: Besides the gruesome injuries, there are also a lot of F-bombs and other colorful language in the video below.