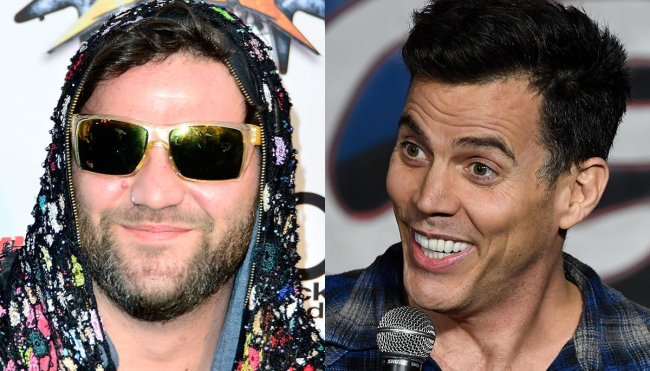 It’s hard not to revisit old episodes of Jackass without feeling the same kind of guilt that comes with retoractively watching ESPN personalities gleefully react to NFL players throwing another log on the CTE fire during  “Jacked Up!”

As was the case with that segment, I think most people who derived enjoyment from watching Johnny Knoxville and his merry gang of misfits willingly subject themselves to an impossible amount of pain back in the day knew it was going to catch up with them eventually—just not in the fairly tragic fashion that it did.

You couldn’t really watch Jackass without thinking “How do these guys deal with all of this abuse?” Unfortunately, more often than not, the answer to that question was “With a boatload of drugs and booze.”

Steve-O managed to escape the issues with addiction that tore his life apart before he sobered up in 2008, three years before alcohol played an instrumental role in the car crash that claimed the life of Ryan Dunn.

A few years ago, it appeared Dunn’s longtime partner in crime Bam Margera had also managed to clean up his act. Unfortunately, he wasn’t able to permanently put his bad habits behind him, as he’s bounced in and out of rehab while staging a fairly public battle with alcoholism since then.

Earlier this year, Margera announced he’d been fired from Jackass 4 before calling out Knoxville for allegedly screwing him over. Over the weekend, he doubled down in a video he recorded after heading to Florida to seek more help in which he put his co-star and director Jeff Tremaine on blast for stringing him along and making him jump through hoops to claim the $5 million he was slated to earn before his contract was terminated.

It’s safe to say those accusations did not sit well with Steve-O, who hopped into the comments to point out those two men were responsible for helping him turn his life around while implying Margera’s behavior had led them to a breaking point. 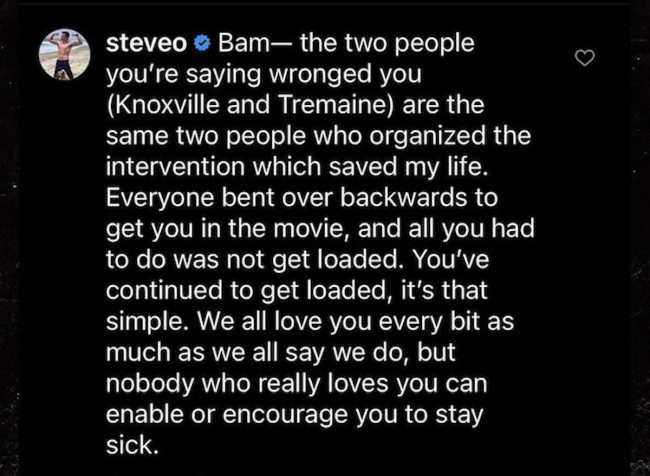 There’s obviously no way to know who’s telling the truth here, but Margera’s decision to direct some of the blame at the people who have tried to come to his aid time and time again is straight out of the Addiction Playbook.

You can only hope the person he’s working with right now will be able to help him break the cycle, and I wish him the best of luck.