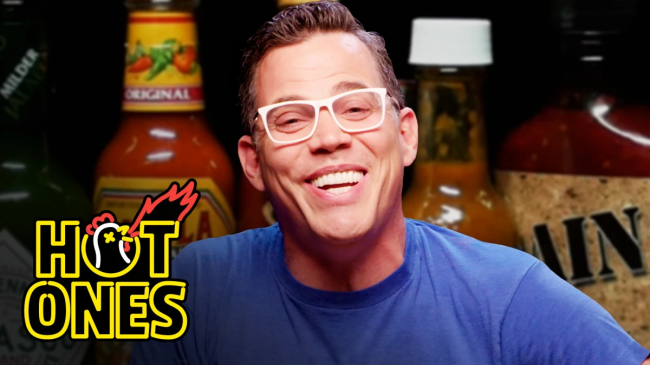 Steve-O. First We Feast’s “Hot Ones” Challenge. There was no chance this wasn’t going to go off the rails at some point, right?

Right. And it did.

But not before Steve-O and host Sean Evans discussed numerous fascinating topics such as how does one jump from a three-story building into a five-foot deep pool without suffering permanent injury, how to NOT blow up your own living room, saving head trauma and nut kicks only for special occasions, getting tossed down a flight of stairs in a bell cart by 50 Cent, getting “beaten into a blackout” by WWE star Umaga, performing an “upside down nut kick” on a fan, and Steve-O’s own personal Hot Sauce For Your Butthole.

Then, to close the show, Steve-O says to Evans, “I don’t even have to ask you who you think is the king of “Hot Ones.” We know. It’s Gordon Ramsey. Right? I mean, that guy was an absolute maniac on this show. So I’m not willing to call it here, okay? I’m going to take it one step further.”

Steve-O then proceeds to chug the entire bottle of Steve-O’s Hot Sauce For Your Butthole, which has host Sean Evans audibly and visibly freaking out.

However, in true Steve-O fashion, he wasn’t done there.

“Wooo! Yeah, that last bit was really unecessary!” Steve-O cries after dousing his eye in hot sauce. “Ahhhh! It got right in there! Woo!”