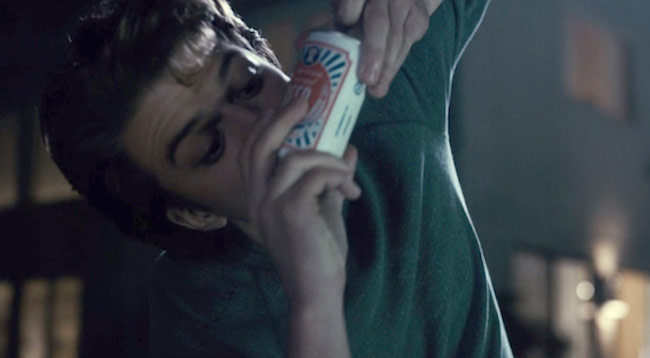 I’m sure plenty of people are stocking up on Eggo Waffles in preparation for tomorrow’s premiere of the second season of Stranger Things, but I’ll be paying homage to Chief Jim Hopper by buying a six pack of Schlitz to help chase off my inner demons while watching the ones on the screen.

However, if you’re looking for a slightly classier beverage to compliment your viewing, you’re in luck. Michigan’s Short’s Brewing recently released a Chief Hopper Double IPA inspired by David Harbour’s character on Stranger Things. The beer clocks in at 9.2%, which means you’re virtually guaranteed to enjoy the show even if it doesn’t live up to the first season.

Chief Hopper is a Double IPA hopped with Vic Secret, Simcoe, and Centennial hops inspired by the show “Stranger Things.” Chief Hopper is deep gold in color and has a dense white head. Dank aromas of pine, grapefruit, pineapple, and mango are accompanied by just a hint of malt. Smooth and balanced in flavor, a citrus forefront is matched with equal malt character.

Netflix recently sent the world’s nerdiest cease and desist letter to the masterminds behind a Stranger Things bar that popped up in Chicago earlier this year, and there’s a chance they could pull a similar move in this situation. However, based on the number of beers I’ve had with pop culture references in the name and on the bottle, Short’s should be in the clear.