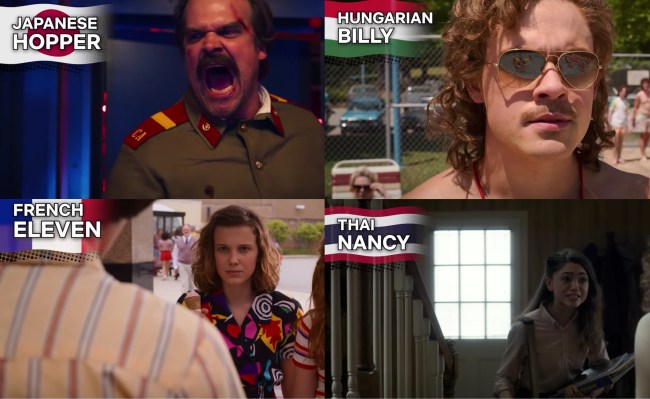 I don’t know if you guys have this problem as well but I find Stranger Things to be one of the least re-watchable shows on Netflix. It is a personal favorite of mine. I binge-watch the new seasons the second they drop on Netflix. But there’s always such a crescendo to the seasons that culminates in a massive reveal and/or plot twist that going back and re-watching the season again seems like a waste of time.

That’s kind of why I love this clip. It reminds me of how much I love the show while adding a new element to it. Netflix knows what’s up, maybe that was their intention all along.

They dropped this clip showing what Stranger Things looks like in other languages including Italian, Japanese, and others. And I have to say that Jim Hopper firing an AK-47 and clearing a room while screaming in Japanese is the exact type of energy I need in my life right now after being cooped up inside for weeks. I really need someone to come into the house and tell me to GTFO.

Hungarian Billy might be the second favorite of mine. That dude was an incredible addition in the recent season because he managed to capture the 80s persona so perfectly without overpowering the storyline with its presence.

Side note: did anyone go into these past few weeks expecting that they’d be able to catch up on Netflix and watch more TV and movies than ever only to find that they’re working earlier and later than ever before and there simply aren’t enough hours left in the day to even flip the TV on? I know I’m not alone here.