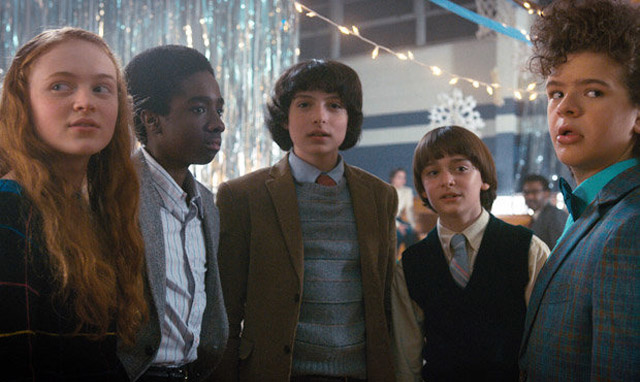 For fans of the show, season three of Stranger Things cannot get here soon enough. Unfortunately, all indications are that we’re going to have to wait until 2019 to finally get our fix, at least according to David Harbour.

So until that day finally arrives, we’re just going to have to make due with the trickle of information that has been slowly flowing from those in and around the show’s production.

Executive Producer Shawn Levy has already revealed some juicy details about Stranger Things season three in that there is going to be “forces of evil that are new.” In other words, poor Will Byers and fam will finally be getting a little bit of a break. (Poor Bob Newby.) Levy also mentioned that we will be getting some more Steve and Dustin camaraderie.

Fast forward to Sunday night and on the red carpet before a panel at PaleyFest, Levy dropped some more significant new season three details about the plot and characters to The Hollywood Reporter.

…on the red carpet before the panel executive producer Shawn Levy revealed that the third season would take place one year after the second season, during the summer of 1985. He also added that Eleven (Millie Bobbie Brown) and Mike (Finn Wolfhard), and Lucas (Caleb McLaughlin) and Max (Sadie Sink), respectively, would all be couples at the beginning of the season. None of the cast had gotten the script yet, so Brown, who plays Eleven, learned that she would be in a relationship on the carpet.

“Mike and Eleven and are going strong, so that’s a relationship that continues, and same with Mad Max and Lucas. But again, they’re like 13- or 14-year-old kids, so what does romance mean at that stage of life? It can never be simple and stable relationships and there’s fun to that instability,” Levy said.

Levy also revealed that Steve Harrington, played by Joe Keery, will have more of a role in the next season. “We’ll definitely get to see some more of Steve Harrington in season three, and I’ll just say we won’t be abandoning the Dad Steve magic. I don’t want to say much more, but I literally feel that we were walking along and we stumbled onto a gold mine with Dad Steve,” Levy said.

Levy also announced that like Ghostbusters in season two, another film from the eighties, this time Back to the Future, will be a reference point in the upcoming third season of Stranger Things.

Unfortunately, we also know one bad thing about season three as one of the co-creators already revealed “that character” will be back for more.