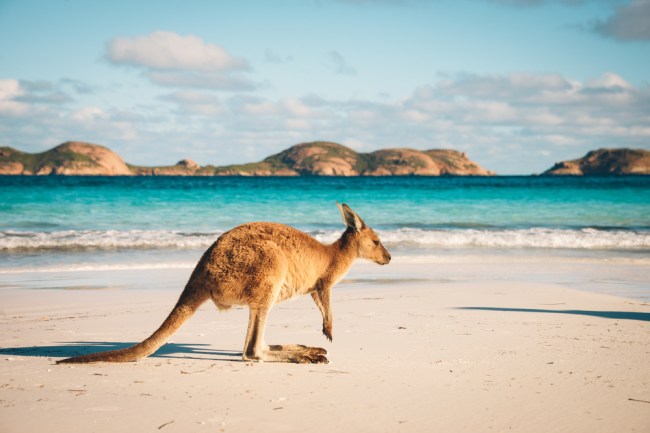 Australia, which is almost twice the size of Europe, was dismissed by a Southern New Hampshire University (SNHU) professor who said it wasn’t a country. Instead, the unnamed professor said Australia was only a continent, but not a nation. While it is a continent, it is also a country as everyone who passed fifth-grade knows except this professor.

Ashley Arnold, a 27-year-old student and stay-at-home mom, was taking an online sociology class at Southern New Hampshire University. For the final project of the class, the students were asked to analyze the social media use of any nation. Ashley picked Australia, because why wouldn’t you pick Australia? The Land Down Under is not only rich in kangaroos and vegemite, but you’ve got so many memes about Crocodile Dundee, Steve Irwin, and koalas at your disposal. RIP Steve Irwin.

The professor doubled down on her stance that Australia is not a country.

I will gladly re-examine your week 2 milestone project report. But before I do I want you to understand that any error in a project can invalidate the entire research project. Research is like dominoes, if you accidentally knock over one piece the entire set will also fall. Australia is a continent; it is not a country. That error made it nearly impossible for you to accurately complete your week 2 research outline correctly. As I mentioned above I will look over your week two paper once again and see if you earned more credits than I gave you.

Ashley didn’t lose her patience with her ignorant professor and sent yet another email, this one included a link to the “About Australia” section of the Australian government’s website where the first thing in bold print says, “Our country.”

Australia is both a country and a continent. It’s the only country that is both. I provided a resource in the first email that clarifies that for you. If you need further clarification google or the SNHU Shapiro Library has that information you. Again I mean no disrespect but my grade is affected by your assumption that Australia is not a country when it in fact is. Thank you and let me know if I need to provide further resources proving Australia is a country.

The professor responded: “Thank you for this web-address. After I do some independent research on the continent/country issue I will review your paper.” Independent research? When you do a simple Google Search of “Australia,” one of the top results is “Country in Oceania.” Click Wikipedia and search “Australia.” It says: “Officially the Commonwealth of Australia, is a sovereign country comprising the mainland of the Australian continent, the island of Tasmania and numerous smaller islands.” We’re not exactly debating the Quantum Entanglement Theory here, this is a simple thing any 9-year-old can look up in seconds online for their geography quiz. Even turn on the Winter Olympics and see athletes representing the COUNTRY of Australia.

Southern New Hampshire University did not want to be known as “Australia is not a country truthers” and has commented on the situation. “At SNHU, we hold our professors to a high standard of excellence and strive to provide high-quality degree programs for all students,” A SNHU spokesperson said. “On this question, the student is right. We take this concern seriously and our academic team is working to resolve the matter.” The learning institution also said they would reimburse Ashley for the $1,000 course because of the professor’s ignorance.

“We deeply regret the interaction between our professor & our student. We have apologized to Ashley, replaced the instructor, & are reimbursing her tuition for the course. To our friends in Australia, we know that you are a country & a continent, best of luck in the Olympic games!”

We deeply regret the interaction between our professor & our student. We have apologized to Ashley, replaced the instructor, & are reimbursing her tuition for the course. To our friends in Australia, we know that you are a country & a continent, best of luck in the Olympic games!

Most people know that Australia is a country, but do you know that it is Scooby Doo? Mind. Blown.