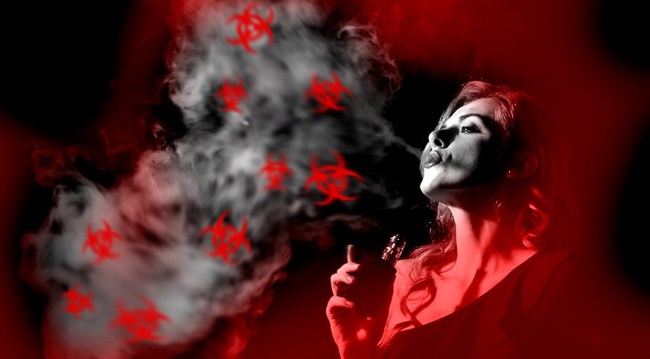 A new study funded by the National Institutes of Health is the first to definitively link vaping nicotine to cancer.

Researchers at New York University have revealed that the results of their study show e-cigarette vapor causes lung cancer and potentially bladder cancer in mice, damaging their DNA, leading them to the obvious conclusion that vaping is probably “very harmful” to human beings.

Published online October 7 in Proceedings of National Academy of Sciences (PNAS), the study found that 9 of 40 mice (22.5 percent) exposed to E-cig smoke with nicotine for 54 weeks developed lung adenocarcinomas [precancerous lesions]. None of the 20 mice from the study exposed to the same E-cig smoke without nicotine developed cancer.

Tang said the fact that none of the mice exposed to e-cigarette smoke without nicotine developed cancer is “statistically very significant.”

“It’s foreseeable that if you smoke e-cigarettes, all kinds of disease comes out. Long term, some cancer will come out, probably. E-cigarettes are bad news,” Tang told CNBC.

The amount of smoke the mice were exposed to was similar to what a human would inhale if they vaped regularly for about three to six years, Tang estimated.

“If they use e-cigarettes regularly, that’s probably similar,” he said. Much like combustible cigarettes, Tang said his findings suggest that secondhand vaping fumes also pose a risk to other people within close proximity.

The Director of the Centers for Disease Control and Prevention (CDC) Dr. Robert Redfield recently spoke to Esquire about the vaping crisis and said “over three-quarters of them were associated with THC-containing products, as reported. And a number of those were non-regulated THC product, so street market. But I think it’s important also to comment that about 16 percent [of cases] so far were strictly nicotine-containing products.”

Redfield says even products like JUUL that are commercially made but haven’t been FDA-approved are suspect and he recommends not using them.

One recent report by health officials at the CDC stated that 77 percent of the 805 Americans (the number has since risen to 1,080) who have presented with vaping-related illnesses since last summer used THC-containing products – a majority of them being unregulated black market THC cartridges.

The death toll due to vaping-related illnesses in the United States has now reportedly reached 19 with the passing of a 17-year-old male from the Bronx – the youngest person to die so far in the outbreak.

The CDC is still recommending Americans cease their use of all vaping products, “particularly those containing THC,” until the specific cause of these lung illnesses can be pinpointed.

“Our study results in mice were not meant to be compared to human disease, but instead argue that E-cig smoke must be more thoroughly studied before it is deemed safe or marketed that way,” said Tang.