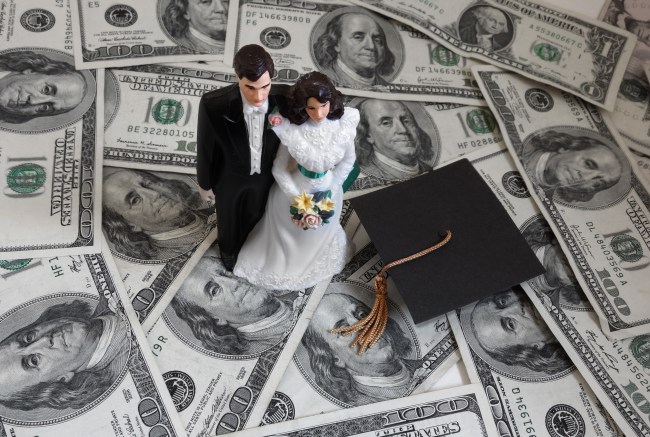 It’s a shame that liberal arts colleges have classes like Dance Theory and no curriculum titled Weddings: Planning, Budgeting, And Not Resenting Your Friends.

I, like many, was very short-sighted when my friends started getting married. I focused on nothing outside of the bridesmaids and open bar. I didn’t factor in the astronomical expenses that accompany attending a wedding. With travel, lodging, gifts, and buying a suit that actually fits, the price per guest can easy hit four figures.

Which is why a survey of over 700 Americans between the ages of 18 and 53 found that both men and women claim to have felt pressured to spend outside their means on wedding expenses.

According to a new study from financial blog CompareCards, 35 percent of bridesmaids and 30 percent of groomsmen polled have gone into debt to cover wedding expenses. What’s more is that 43 percent of maids of honor and 38 percent of best men said that their role required them to spend more than budgeted. Nearly half of the groomsmen polled said that the final cost of celebrating a friend’s marriage made them feel fiscally uneasy. Overall, a third of people who have been in a wedding in the last two years say they regret the money they spent on doing so.

The resentment likely goes both ways, as the average cost of an American wedding today is a ridiculous $33,391, according to Fox. This is why a study from 2018 found that while 52% of couples have pushed back their wedding due to financial concerns, 74% took on debt to pay for wedding expenses.

Bottom line, cut all the unnecessary bullshit: exquisite flower bouquets, multiple photographers, 12-piece bands. All you really need in a wedding is an open bar and a bridesmaid looking to make a bad decision.