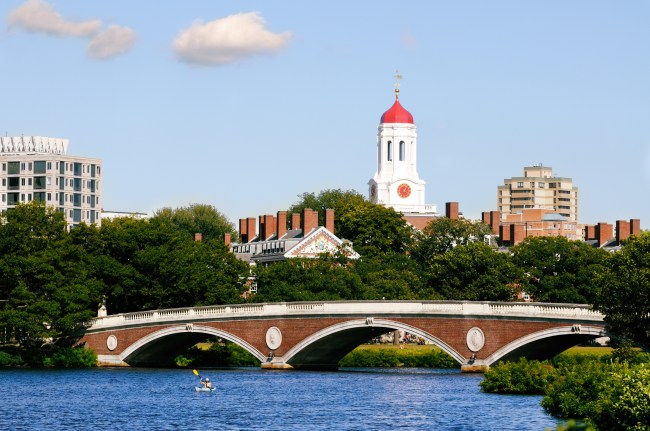 Not sure exactly where this came from, but some goose named David decided to air out the standards required for admission to Harvard in the 1890s:

Here’s the impressive list of knowledge that students needed to get into Harvard in the 1890s.

Honest question: Why have our standards fallen so far? pic.twitter.com/GxIXviphVL

Sure, that’s a lot. Too much, probably. Not sure how any self-respecting high schooler can study French, German, Latin, Greek, AND still reliably hit island cups at > 30% in pong. We (the Harvard admissions committee) seek WELL-ROUNDED students. These 1890s kids sound entirely too narrow-minded.

I can’t think of a single college kid who knows four languages, the basics of Classical literature, algebra and plane geometry, has demonstrated familiarity with the laws of physics and elementary astronomy, and knowledge of the history and geography of Ancient Greece and Rome.

Yes David, neither can I. And that’s because the second some kid started to “demonstrate familiarity with the laws of physics and elementary astronomy,” then pivoted over to Ancient Greece and Rome, I walked away. What kind of idiot lets themself get trapped in a multi-subject lecture from a 17-year-old? Move on. That kid has no power over you. Jesus.

It didn't mean shit. It was already outdated years ago.

Ughhhh Yitong, please. The only thing you have a command of is the slit between the two twin mattresses you pushed together. You named it Gretchen and if the app Foursquare were still a thing, that would be your most visited place.

I mean, I was top 10% in my class and wouldn’t have gotten into Harvard, and I knew:

Awesome, Blake! Good thing you opted for college-level physics (mechanics) in high school. That’ll definitely give you a leg up when you become a mechanic, since you failed so hard so early in life. Also, Yitong has you beat by miles, and I just buried him in the last paragraph. NEXT!

Tbh, I have everything but the languages. I blame America and late 19th/early 20th century immigrant culture of forced assimilation – otherwise I would probably know Yiddish, Russian, Italian, and English.

No Mike, there are other things you don’t have. Like a Harvard degree, I’m guessing, since there’s no chance in hell you were admitted. Not with that attitude, bruh. Not when you’re pinning your intellectual shortcomings on immigration policies from like 1905. Come on, that’s weak as hell. Ever been to an airport? They sell every single Rosetta Stone you could imagine. Only thing holding you back is you, pal.

All of this is to say that while academic expectations may have been loftier in the 1890s, it is possible to get your kid in to Harvard knowing only a couple things today—like the proper technique for scooping a ground ball in lacrosse. Trust me, I know.