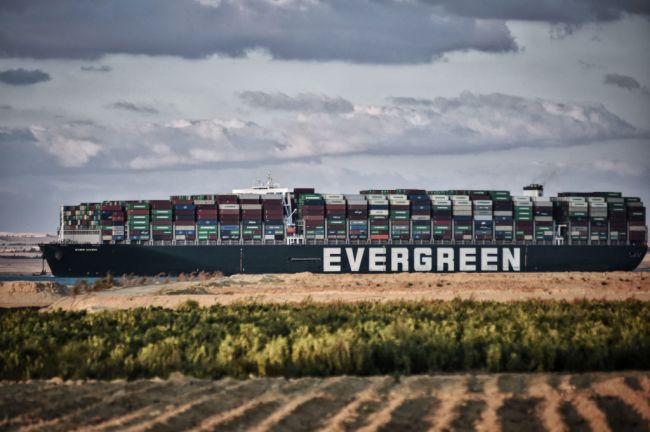 You’ve heard the story by now. The Ever Given cargo ship got stuck in the Suez Canal and blocked one of the Global Supply Chain’s most important shipping passages last week, uniting the entire world around an Empire State Building-sized nautical vessel for six consecutive days. It was a significant blunder in the grand scheme of daily trade, but that didn’t stop the internet from getting off some incredible jokes and memes. Unfortunately for those who were captivated by the saga, but fortunately for the distribution of commodities across the globe, the Ever Given was refloated on Monday morning and was cleared from the passage later in the day. However, that didn’t stop people from creating a boat load (get it) of fan fiction surrounding the event.

It was a warm day in Egypt. You had just been out for a swim. How had it ended up this way?

You were just going through one of your usual routes with a few buddies when everything went sideways.

Admittedly, you may have been a bit too big for this particular route but it had never been a problem before.

As you were making your way through the route, the winds picked up and now you were here. Four of your friends went ahead without you and the other fifteen were trapped behind you. They can’t help you, you know they can’t but you want so desperately to be released.

You got stuck in the canal and now the whole world has its eyes on you. You went around the restrictions and now you’re paying for it.

You curse your rotten luck and the weather as escape plan after escape plan fail. As night falls you huff as they delay your rescue yet another day. You get to spend a lot of time thinking during these late nights.

Perhaps the winds were her beckoning call. Her subtle invitation to spend time together. Perhaps this isn’t so bad. Perhaps you can stay in her sweet embrace forever. Wouldn’t that be nice? You and Suez.

But then you think about your friends. The world. Hundreds of vessels lining up to be let through. Over a billion tons of cargo, barred from their destination. What could be on those ships? Electronics? Medicine? People? Your mind drifts through the possibilities. You were holding up the world.

And for what? Some flirtatious waterway?

Her warm embrace was gentle and kind but you cannot bring yourself to put all those lives at risk. You wish you could stay here forever with her but you can’t. You have to leave. You must let go.

You must let go.

And as you let go the world rejoices. Trade can commence. Hooray.

But you mourn. You mourn what could have been with your beautiful Suez.

You are unable to look back as the world ushers you forward. Away from your sweet Suez.

One contributor wrote a poem: 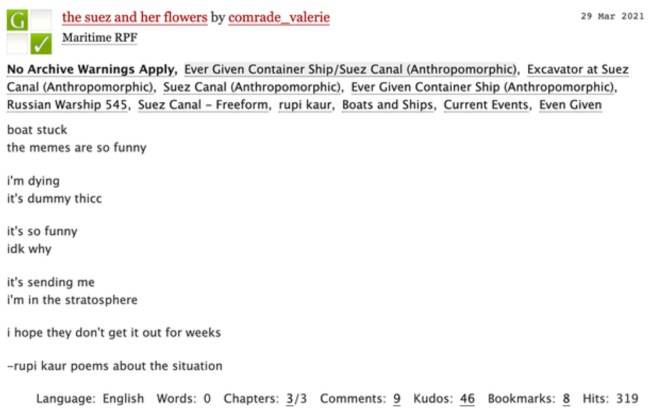 Other submissions weren’t quite as touching, but equally as awesome: 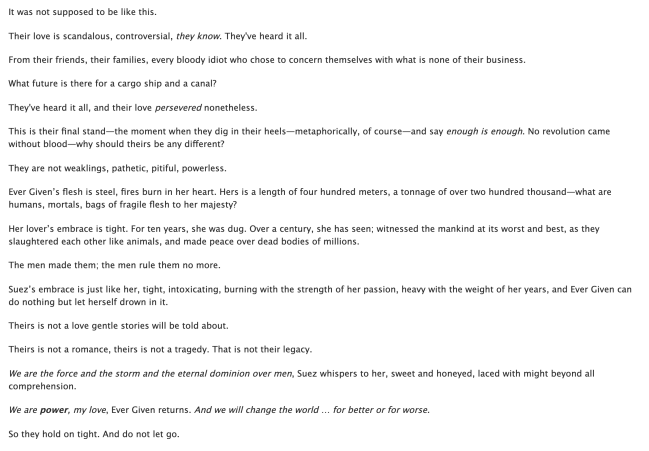 There are many other, must more proactive (people are nasty) stories to be found, and there’s even an original sea shanty! The internet is truly a special place, and we must cherish the week we had. Ever Given may never return to the Suez Canal, but she will forever live in our hearts.